During the month of September, Roy and I have been exploring ways to earn extra cash while out on the road. This was in our plans already, but is particularly pertinent this month, as early retirement incentive funds came to an end. Roy has explored local jobs listed in the paper and leads given to him. We're finding that most jobs don't fit our mobile lifestyle. The employers are looking to hire long term, prefer to hire local, or "ouch" the reality check of wanting younger. We're only wanting to work enough to pick-up a few extra dollars and be done until the next time. We've considered temporary work agencies, but it takes time to get set-up with them. This might work out for areas we plan to be in for several months, then again, we feel it may be more of a commitment then we are looking for. I may look into being a substitute teacher, when located in an area for several months, but it isn't my first choice. New experiences are part of what our adventure is about. We think we've discovered a good fit between our mobile lifestyle and work, through a free job listing service for RVers called Workkampers. Registering online, you'll receive a weekly listing of camper jobs around the country. Roy is set-up to begin working for an Amazon.com distribution center in Campbellsville, Kentucky starting November 7th. The assignment goes to December 23rd. The deal is sweet! They pay our campsite fee (instant $500 savings per month), $10.50 an hour for work performed, and a $500 bonus, if the assignment is completed! They do 20, 30, and 40 hours per week with the opportunity for overtime. I considered part time, but with our pet crew decided it would be best for me to maintain the household. We are already watching for other opportunities, and can see where we could get Workkamper assignments lined-up consecutively. Many of the opportunities are less intense than the Amazon job, and consist of hosting a campground 20 hours a week for exemption from lot rent. We have spotted a job listing for an 1800's silver mining ghost town in New Mexico near Gila National Forest! Now that sounds like the kind of work adventure we're looking for!
at 1:56 PM 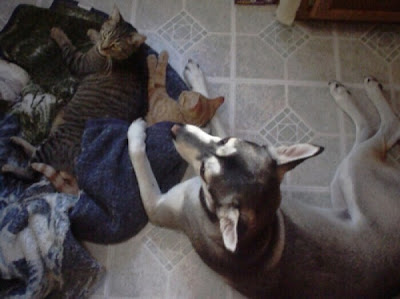 For anyone who is wondering how the crew is doing with accepting Otis, this picture pretty much says it all! Otis was sleeping alone on the floor wrapped in a blanket looking so cute Roy and I could hardly keep our hands off him. I guess Prin and Charles were feeling the same. Next thing we knew Prin was off the couch insisting on wrapping a paw around him, and then Charles came down off the couch to cuddle, too! Although Sugar isn't pictured, she is always protective of baby Otis during his play fights with Charles. Otis is now leading group walks down the sidewalk with the two dogs. That's even a more interesting sight!

Our Home By The Creek 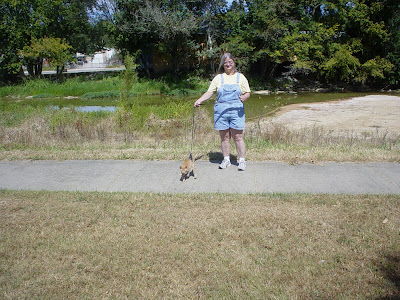 The last couple of weeks have been full of activity! On September 3rd we attended the beautiful wedding of my brother Jim's daughter, Stephanie. We visited with family and friends we haven't seen in a long time. On the 4th we enjoyed more great food, friends, and family as Stephanie and Mike opened their gifts. Roy and Jim have played golf, metal detected, and ridden their bicycles. I've been taking the dogs for runs and getting Otis out for walks a couple of times a day. He is making great gains. He is enjoying chasing leaves that roll with the breeze, and hopping grasshoppers. Yesterday he got so excited that he ran and jumped up a tree about a foot high! Roy has been testing the job market for temporary work. That's been discouraging, but we'll get the hang of ways to earn extra funds. Roy is working on quiting smoking, and I'm starting to get physically active again after last hurting my back. This time my exercise plan will be gentle walking and bicycle riding. Prin and Sugar tried out a swim in the creek off the rock slab behind the camper. We now have a new activity for hot days!
at 7:49 AM

We noticed traveling from Michigan to Indiana that when we pulled into Pokagon State Park for the night that our familiarity with the park and area gave us a feeling of returning home! We thought that was kind of strange, but it was a nice feeling. While at the park Roy was showing the influence of having been on the sled dog tour. Here is his team in training!

After the dog training session, we moved on toward Corydon, Indiana. Being familiar with Corydon from our previous stay, we noticed on our arrival this time that we had a feeling of returning home! Wow! Could it be as a person travels and gains familiarity with places around the country that they feel they have many homes? I think probably so. 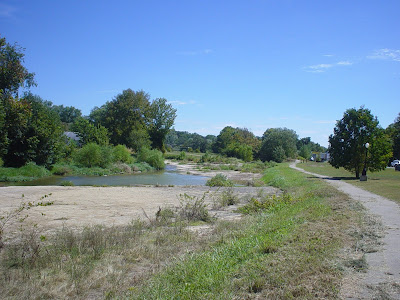 Here is our spot along Indian Creek. It is the same RV park that we were in before. We chose to camp a little closer to the island where we run the dogs. The creek is very low and the concrete slab bridge to the island is dry enough for walking across. 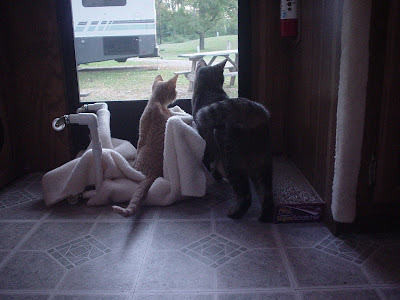 Here is Otis and Charles checking out life outside the camper. We discovered that tipping Otis' wheelchair and putting a small blanket on it, makes a nice stationary chair for support and a boost up for looking out the door. He is getting lots of time outdoors with a belly strap and leash helping to keep him upright. His walking is improving daily. In this picture you can see where we padded the corner of the cabinet to protect Otis, as he and Charles enjoy some enthusiastic wrestling matches. The padding gives the camper a touch of 60's van decor! Cool, man! Peace!

So Much To Tell

First of all we want to thank June and Earl for 3 months of super stupendous hospitality while we stayed at their home! It takes some very special friends to do that. We left Brimley Monday and were really glad June and Earl could meet us for the sled dog tour in McMillan, MI. 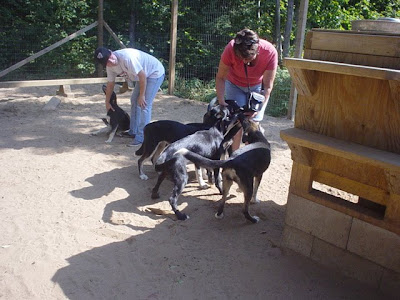 Here is a picture of June and the tour guide in the pup's pen. The pups are Alaskan Huskies. Alaskan Huskies are a mix of Husky and other breeds. Their mutt heritage makes them a hearty stock and of a more compliant nature than a purebred Husky. 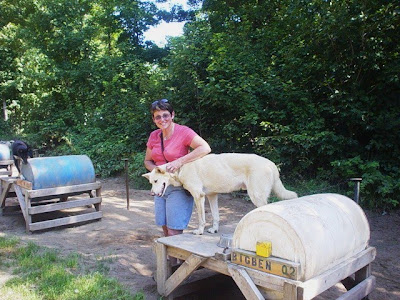 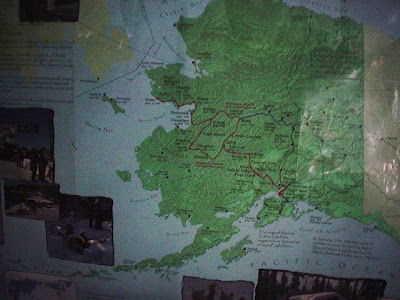 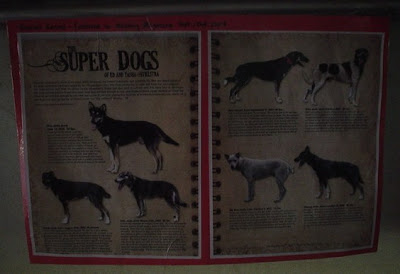 The owners of the kennel have had several dogs featured in Mushing Magazine. The white dog on the page is the dog, Big Ben, that June petted. 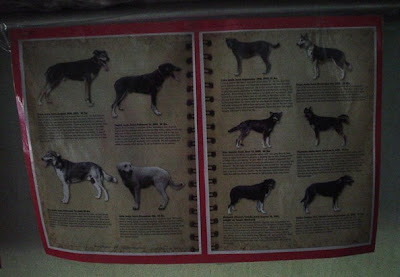 If you'd like to read about the dogs, you could probably find an archived copy of the article online. This was published in the September/October 2009 issue. 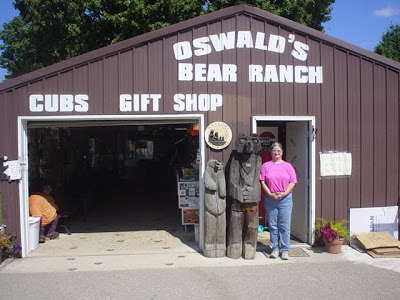 We said our goodbyes to June and Earl at the end of the sled dog tour as they had already been to Oswald's Bear Ranch. Oswald's was just four miles away, so we were able to do it in the same day. 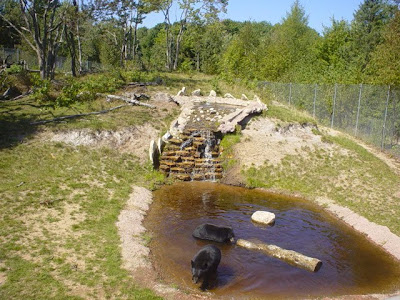 It was in the 80's and the bears were enjoying their pond. I felt like joining them. 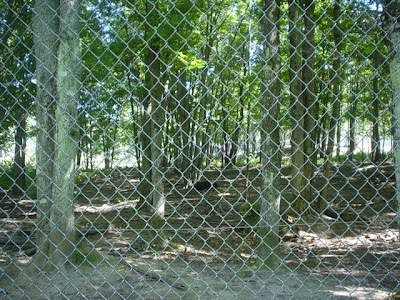 Although the habitats were nice and the bears obviously well cared for, we didn't find the self-guided walk-about very exciting. I think having seen bears in the wild they weren't very exciting behind the high fences. We saw some bears lying near trees. They would be easy to mistake as logs. 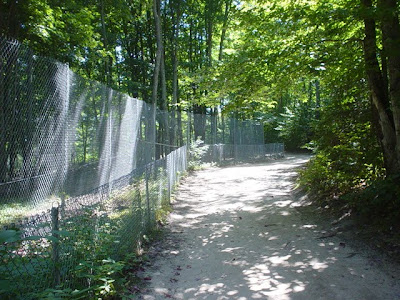 We decided that seeing one of the huge bears coming down the pathway around the enclosures would be extremely exciting, but are glad that didn't happen!!! 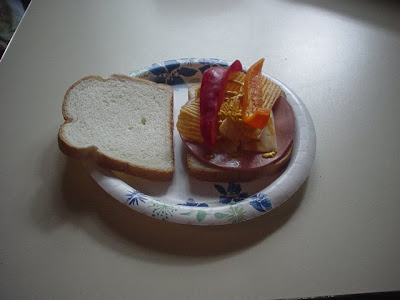 For those of you who know cooking isn't my specialty, check out this gourmet bologna sandwich I made! Who says you can't eat well on the road! 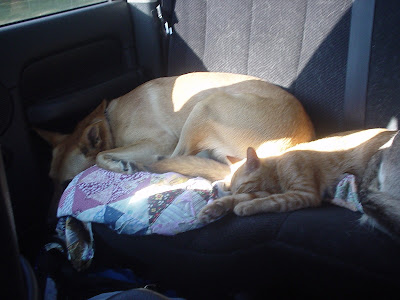 Traveling down the road the animals did stints in the camper and the backseat of the truck. Otis is right at home sleeping between Prin and Sugar. Charles is happiest remaining in the camper. 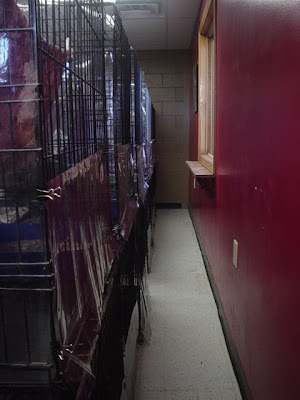 Right up through Saturday before our departure, I was completing shelter projects. When we cut the plastic for the sneeze guards we had an extra 12" wide strip left over. I had been mulling over ideas for using it. It came to me close to our departure to use it as barriers on the backs of the cages to help keep litter from being kicked out of the cages. It's experimental, and the shelter staff will see whether the idea is a keeper. The idea of creating walkways behind the cages for sweeping up wayward litter was spawned from the litter guards. 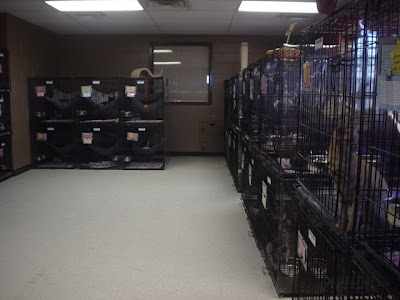 The new cage arrangement is being tested, and the staff will tweak it as necessary. I'll miss my shelter activities and all the people involved with making it the best it can be for the animals. They've given me a great send-off that will keep me thinking of wanting to come back! 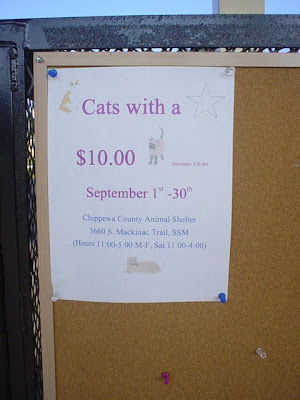 One more cat special was posted for September before leaving! Love those kitties! I plan to make flyers for future specials from the road. 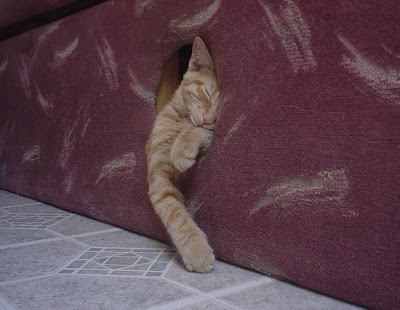 Here's one more cute picture of Baby Otis. I've gone on so long it's put him to sleep where he stood. Hopefully you've enjoyed our day's adventure!