Life at home has been a whirlwind for the last two months! We were quite busy trying to put lots of things in order prior to our planned September 1st departure to new adventures, when I got a bright idea! The last week of June I was online researching something dog related, when I came across an amazing statement. The statement said that the American Kennel Club has recognized Labrador Retrievers as America's most popular dog for the last 20 consecutive years!!! With 11 Labs housed at the animal shelter I volunteer for, I had a light bulb moment! 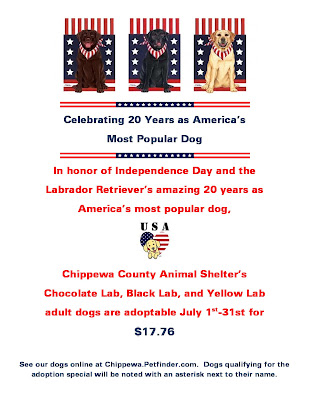 With less than a week to formalize a plan, create a flier, coordinate with the people who post the fliers, and update the shelter's website information; life got crazy! The shelter manager came up with the $17.76 adoption fee to coincide with the year the Declaration of Independence was signed! With the power of the Internet, the above flier was in the hands of the necessary people a few days ahead of July 1st! 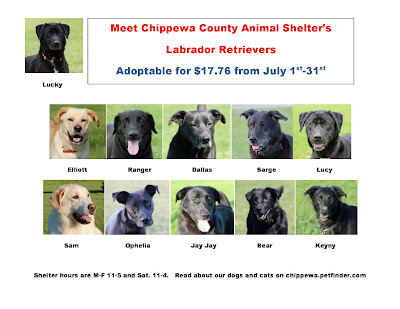 As many of you know, I was an avid hands-on volunteer at the shelter for 4 years prior to our leaving Sault Ste. Marie, Michigan. I have continued as an avid volunteer via the computer for the last 2 1/2 years. It's amazing what can be done over the Internet. I post the shelter's cat and dog pictures to petfinder.com, create fliers for adoption specials, and coordinate with the hands-on people back in Michigan. I am unofficially the Pet Promotions Volunteer and love it! Just prior to the start of the July adoption special, I had begun researching new ideas for promoting shelter animals. I decided to try posting pictures of individual animals and a personal letter from them on the shelter's Facebook page. I did my first post on June 23rd featuring a scruffy looking cat named Gladiator. Check out my creative writing at: http://www.facebook.com/chippewacountyanimalshelter . I am trying to post two animals a day. It is showing an amazing impact on adoptions. I created this composite flier of the Labrador Retrievers to post and then did an individual letter from each of them. Seven of the eleven have been adopted! 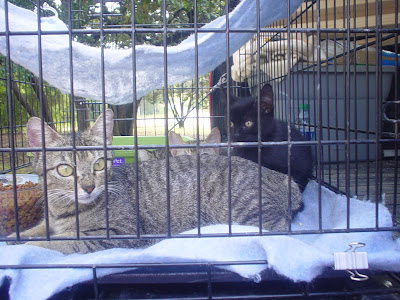 If the computer projects for animals wasn't enough, I've had lots of opportunities to foster kittens and this one mama.  Miller Creek RV Park has had 4 adult female cats in various stages of motherhood dropped off in the park since early Spring. At the appropriate times the cats and kittens were live trapped. There aren't any local shelter's, so the RV park management is pretty much on their own as to how to handle the situation. There is a local trap and release organization operated by volunteers.  The organization will pay for homeless cats to be spayed or neutered. The RV park manager has been working with the Blanco Cat Coalition, and all the mama cats have been altered and placed in homes!  None have had to be released to local feral colonies. This picture shows the mama I cared for and her 3 kittens. After this mama cat left, I received 5 more kittens to go with the pictured 3! I only had them a couple of weeks. My job was to check their health, and advance their socialization. 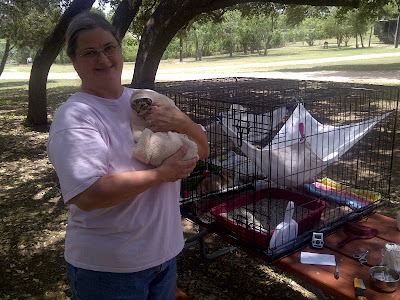 A few weeks went by, and guess what? Another mama cat showed-up at the RV park. The manager took care of the mama cat.  I took her two totally wild kittens. The scenario seems to be that nice house cats are being left to have their kittens in the wild. The mother cats remain domesticated, but have a litter of kittens that become feral. When the Cat Coalition was contacted, they were in desperate need of a foster home for two more kittens, so I say to myself, "What the heck, four are as easy to take care of as two!!!" The picture is of my picnic table kitten clinic. The one I'm holding is getting a desperately needed flea treatment. 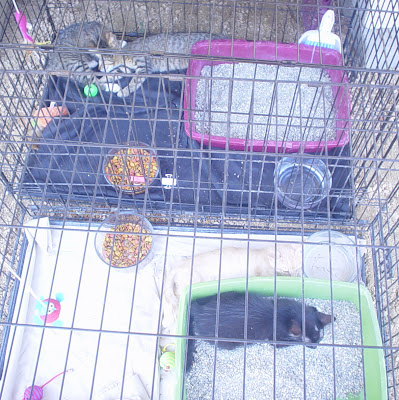 Here is a picture of my babies! The two Tiger kittens are about 3 months old. They are fairly tame and just needed a little more polishing. These two babies have since been accepted by a no-kill animal shelter in Austin. I'm beaming like a proud parent that my babies passed a socialization test to make the grade to get into the shelter! My highly socialized and quick to be adopted kitties in Michigan were called "Carter Kittens" at the shelter!  The peach and black kittens are my 6 week old wild babies. I think I'm showing the influence of living in Texas by naming them Miss Peach and Miss Emma? I did it without even thinking about it! Miss Peach has come along pretty nicely and will probably move away in a week. Miss Emma has had some medical issues and has been quite ill-tempered. I think we're gonna work it out, though. It appears that there will be more kittens to round-up in the near future. I looked out the window this morning to see a kitten the size of my two older ones hanging around outside a cage and reaching in to snag some food. A litter has been spotted scampering around across the road. We're guessing they'll migrate this way eventually. 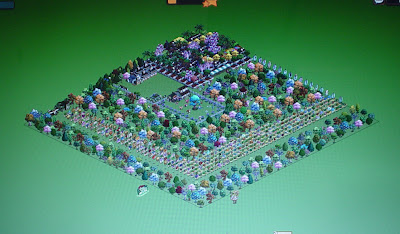 When I'm not doing cat and dog things, I'm often enjoying a computer game I've been playing for a year and a half called Farmville. The game has progressed from one farm to six.  Most farms crops have been mastered. I'm finalizing some tree and animal masteries, before giving up my life as a computer gamer.  The trees in the top corner are all that are left to be mastered.  The forest is just for decoration.  The basics of the game is that you start out with nothing but around 25 field plots to plant, and build your farm up to be whatever you'd like it to be, while earning masteries along the way.  Everyone's farms are unique to them and are constantly changing. 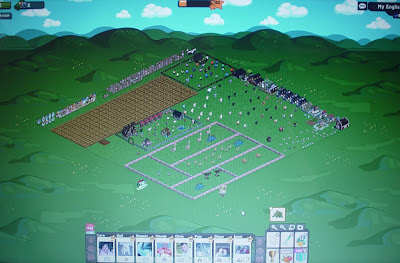 This is England, the second introduced farm.  I use it for animal masteries, and to help speed-up new crop masteries for other farms. 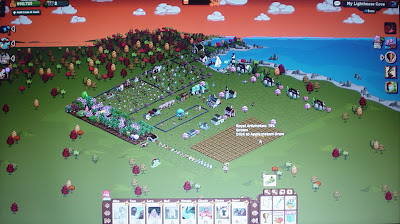 This is Lighthouse Cove, and is the third in the series. 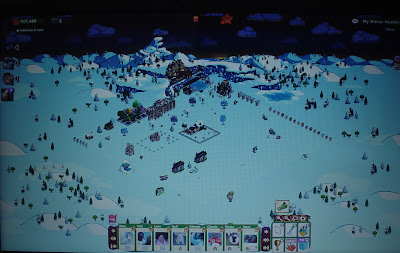 This is the Winter Wonderland farm, and is the 4th farm introduced. 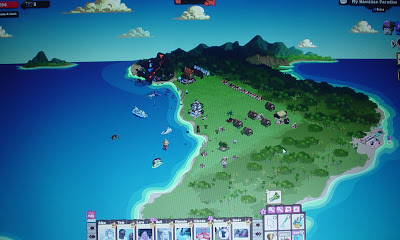 This is Hawaii, the 5th farm.  When it came out, I wasn't going to get involved with it.  A few items start to trickle in that are used on that farm, and next thing you know, you're in full swing again!  Most of my farms are mastered to a point that they don't take much time.

This is the most recent farm, and is called Jade Garden. I'm pecking away at the masteries while I finish-up my other farms. This is the last farm for me! Really?! 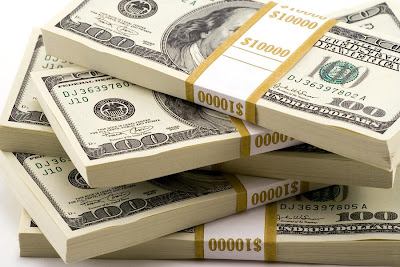 As mentioned at the start of this blog, life was quite busy even before the dog and cat activities began. We are hoping to get our wheels rolling this Fall to tour southwestern Texas and on into Arizona for the Winter. Prior to leaving there is  a lot to be done, and it all takes money.  I wanted to get a dental check-up since we're established locally. Good check-up except for needing a crown replaced! There goes a few hundred and, of course, it would have been  a lot more hundreds without our dental insurance. I need a visit to the doctor to update prescriptions, and it's time to consider glasses. There's a few more hundreds to budget for! The truck and camper need registered, as well as, a truck inspection. More hundreds! We said our prayers, that the inspector wouldn't require truck tires this year or even more hundreds would be needed!  Our prayers were answered!  We need to get our mail service through Escapees travel club in order to maintain a residency while traveling hither thither. Hundreds needed for that, too! Surprise, bad year for fleas in Texas! Neck drops for 2 dogs and 2 cats are required monthly. That looked like hundreds, but we shopped around and got lucky. Odie has developed grass allergies. We've checked with the vet regarding an allergy shot and we're talking over half a hundred. I'm sure there is more, but you get the idea. Life on the road doesn't keep the expenses of life away from one's door, and cuts into the fun money the same as anyone living anywhere. We're making headway getting things checked off the to-do list and it's looking good that we'll be on the road this Fall. In the meantime, I'm loving my time with the extended furry crew, and............ 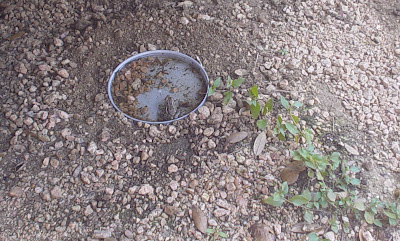 the little frog next to our doorstep!  It's been trying to stay cool in the drip of the air conditioning condensation.  We improved his drip by giving him his own built in swimming pool!  We'll give froggy a ride to the creek when it's time to roll.  That's a glimpse into our world for now!
at 7:39 PM

In Texas Hill Country, there are a lot of events that happen regularly once a week or once a month.  Because of the multitude of events, and the scatter of event dates for the area communities, it is hard to maintain on ones mental calendar.  As a person gets busy with their activities at home, it is easy to keep pushing these regularly scheduled events aside, as something to do later.  Next thing you know your time in an area has come to an end, and the events were never attended.  As simple a concept as this is, it has taken me awhile to figure out that any event you want to attend needs to go on the calendar!  If attending the event gets pushed aside because you know it's coming around next week or month, then repost it on the calendar for that date.  Pushed aside again?  Repost for the next available date.  It's very easy to be apathetic about attending an event that seems readily available in the future.  Having it on the calendar marks it as an event with a planned attendance date.  Since following through with putting activities on the calendar and moving them ahead, as many times as it takes for us to get there, we have checked off several local events.  Pictured is a monthly car show gathering in Johnson City.  Other activities with once a week or once a month schedules are art walks, wine tasting, market days, tours, theater performances, music performances, and various presentations.  I hope this simple plan helps you get to events that you think you'd enjoy, but just never seem to get around to!
at 8:33 PM