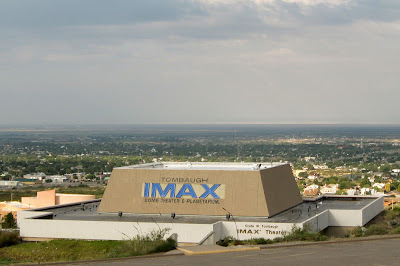 Roy and I went to the Tombaugh IMAX Theater to check out the domed screen presentation of the documentary, Tornado Alley.  The dome movie screen is not a 360 degree audience surround screen, as we had imagined.  The sides of the dome start at a level above one's head when seated, and the domed screen is tilted to be in front of the audience causing the view to be primarily overhead and curving to the sides.  The seating is plush and gives the feel of being in a cushioned easy chair.  The entrance fee we felt was a bit pricey at $6.00 per person for a 43 minute documentary that looks as though it may have aired on television.  The film was dated and out of focus.  The IMAX experience had some redeeming qualities, but I would recommend seeing a different film.  The film, Tornado Alley, put the focus on the storm chasers more than the tornadoes.  The experience that we felt was redeeming was the feeling of flying through the air in an armchair and being set down in different locations! Because the surrounding images felt so life-sized, it was at times like being right in the scene.  This was particularly true when we felt we were set down in the middle of a neighborhood street, as the wind blew things about.  Another amazing scene was being in a neighborhood in the aftermath of a tornado.  I have never felt the total devastation of a tornado from any t.v. news broadcast like I did experiencing it on the big screen! We also learned of a movie director's dream to film the inside of a tornado and the vehicle he built for the job called TIV (i.e. Tornado Interceptor Vehicle)!  With every activity, Roy and I learn something new!  By the way, the Tombaugh Theater is named for the American astronomer, Clyde W. Tombaugh, who discovered Pluto, several asteroids, and advocated for serious research into UFOs! 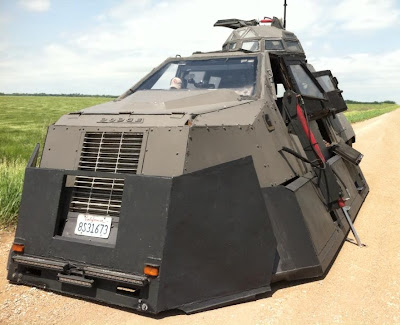 This is TIV-2, the truck filmmaker Sean Casey built for filming inside tornadoes!  The truck is built to withstand the 220 mph winds that tornadoes produce!  The 14,000 pound TIV-2 is based on a Ram pickup.  It has six wheels, with a tandem set in the rear.  The truck is armored with 2" thick aluminum, bullet proof glass, and steel.  The armor plates slide down to the pavement on each side preventing the truck from being lifted.  For even more stability, it uses steel spears that shoot 3' into the ground!  A rotating turret sits on top of the truck for the cameraman.  It has 360 degree capability and can open when the weather permits.  The TIV-2 tops out at 100 mph, which is said to be fast enough to outrun a storm.  Driver and medic Marcus Gutierrez says it's just like driving a regular truck, with a few add-on pieces!  We say, "How cool is this!"
A few days later we returned to the Tombaugh Theater to take in the planetarium presentation.  The admission fee is $3.50 per person for a 50 minute presentation.  Pinpoints of light are projected onto a darkened screen to represent the night sky over Alamogordo.  The view is changed according to the direction a person would be looking and the location of the stars in different seasons.   An instructor gives a presentation on constellations and tells of the mythology behind them.  We learned the shape of several star patterns and that what most people would call constellations are technically called asterisms!  Apparently, a constellation is an internationally defined area of the celestial sphere!  Asterisms are the patterns formed by prominent stars, but in non-technical language are referred to as constellations.  If you hang-out with astronomers, you have to get it right!  We also learned that asterisms such as the Big Dipper are not internationally known by the same name or even by the same shape!  Although we felt the points of light could have been projected more sharply for a better presentation, we still learned a lot!

Oasis Of The Texas Hill Country 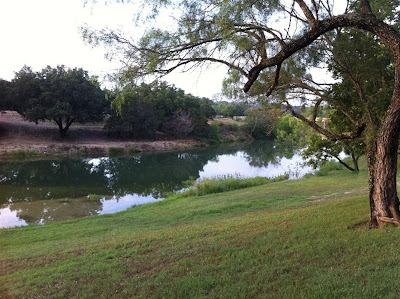 After a great deal of researching the Santa Fe and Taos, New Mexico areas, we finally found an affordable r.v. park with most amenities and good ratings.  For anyone with a conservative budget wanting to be close to those communities, we would recommend Cottonwood RV Park in Espanola.  It is 23 miles from Santa Fe and 45 miles from Taos.  The park is $350 per month plus electric at 19 cents per kilowatt.  They mention having a current special rate of $300 per month.  That helps take some of the sting out of the high cost of the electricity.  They have free wi-fi that's reported to be good, but no cable t.v..  The manager stated that it isn't for not trying!  Cable t.v. is apparently unavailable to their location.  Espanola is at an elevation of 5,200 feet.
Since being in Alamogordo the last two months, Roy and I have become increasingly aware of the intense heat and dryness of what we've termed deep desert!  Remember the cartoons with a cowboy crawling across the desert crying, waaater, waaaaater!  Well, that's how Roy and I are feeling.  There isn't any water anywhere and we are drying to a crisp!  We thought back through our travels and realize we've been in the deep desert for 9 months!  We're not novices to desert living, as we lived in the high desert of Idaho for 8 years.  We've just never experienced desert this dry or hot!  We're ready to make our escape!  We've changed our plans to spend the Winter in Arizona this year and instead have decided to give the coast of Texas a try!  We've decided we also need a break from the 11 months we've been on the run like tourists, so have decided to skip Santa Fe and Taos until next Spring.  We have decided to head to a place that captivated us for 18 months, The Oasis of Texas Hill Country!  That is the slogan for Miller Creek RV Resort in Johnson City, Texas.  We didn't appreciate the title until now!  There are lots of swimming holes nearby that we had researched when we were there before, but didn't go to.  They will be our focus this time!  Ahhh, just to lay in the water awhile!  Miller Creek is pictured above.  We look forward to not having to intensely research, plan, or budget for awhile.  Being together with good friends again will be great!  For our fellow travelers that may be in the area, give Miller Creek RV Resort a try, and let us know you're there.  There are activities for nearly every day of the week and great people for socializing with!  If that isn't enough, there is a massage therapist on location, a tanning bed, hot tub, and exercise room.  It's truly more than an r.v. park, it's a resort!  The rates are very reasonable.  Our estimated stay is August 1st through Thanksgiving and possibly Christmas.  If you haven't seen Johnson City at Christmas, it's worth the drive to experience it!
﻿
at 6:20 PM 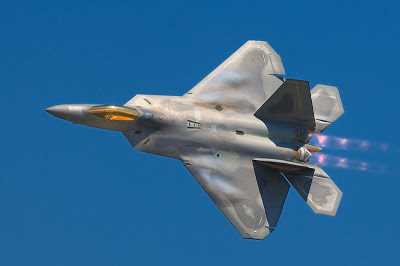 Holloman Air Force Base and White Sands Missile Range are 10 miles west of Alamogordo.  During our two months stay in Alamogordo we’ve heard on several occasions what sounds like a squadron of jets flying over and a corresponding ground shaking boom, as they fly north and then make another pass going south.  The thunderous booms have varying qualities, but each time the ground ripples and there is an explosion compression that can be felt!  My first reaction besides a few startled jumps was the feeling that hearing bombs explode tweaks one’s mind a little each time it’s heard.  These booms are like none we’ve ever heard before!  They are very loud, but with a crisp, clear, precision quality!  You can almost visualize the size of the target and the explosion.  One felt like a large column with the explosion debris flying out around the bottom.  It felt like an air strike that might destroy a building the size of a warehouse.  Shortly thereafter, large wide ripples rolled under the camper!  Another explosion felt more expansive like a strike that would take out a neighborhood or small community!  The camper and ground vibrated!  One had the feel of a small missile that took a nosedive into the ground possibly to take out a small target.  It created a pop in the ground that seemed to come straight up through the floor of the camper 3 feet!  Roy, the dogs, and I have become attuned to the rumble of the jets coming and wait expectantly for the soon to follow boom.  Our dogs tremble at the sound of the jets approach now!  The dogs have found their best hiding places for the fly-overs and are coping!  One day I heard on the radio reference to a Sound of Freedom report!  This is a schedule of fly-overs.  Holloman AFB posts the schedule on their website and will email it directly to people on request.  There is a number on their website for filing noise complaints and damage reports!  I attempted to find a schedule of missile tests without any luck.  I did find a couple of interesting tidbits, though!  I found that remote controlled planes are used for air combat targets!  I found that sonic booms will travel one mile for each thousand feet a jet is flying, so the sonic boom for a jet flying at 30,000 feet will travel 30 miles!  Different type maneuvers create different types of booms.  Here is information provided by Holloman AFB explaining sonic booms: Sound of Freedom.   No reference is made to missile range tests.   Maybe what we’re hearing and feeling are sonic booms from the F-22 Raptors.  We won’t argue with that, as we really don’t know.  All we know is that there is a nearby missile testing range and what the explosions sound and feel like. Holloman AFB hosts 1-2 F-22 Raptor squadrons that are available to the president to deploy at a moment’s notice.  Training is constant rehearsal for what the pilots will encounter on a real-world mission.  The 49th Wing provides combat ready airmen, F-22 Raptors, and trains MQ-1 Predator and MQ-9 Reaper pilots and sensor operators.  Here is a fact sheet provided by the base about the aircraft they work with:   Aircraft Fact Sheet.
I just discovered that White Sands Missile Range has a website.  It states that White Sands Missile Range has become recognized throughout the United States military test and evaluation community, as the premier location for conducting weapon system tests and evaluations!  It states that throughout White Sands Missile Range there are a wide variety of targets for all types of weapons testing.  They state that the desert environment closely represents a number of theater target environments, including mountainous terrain inhabited with caves, concrete bunkers, fixed and remote control tanks, trucks, and other specialized vehicles.  To learn more about the tests conducted and test locations go to the White Sands Missile Range website.  Here is a good starting point:  Test Center.
﻿
at 3:45 PM