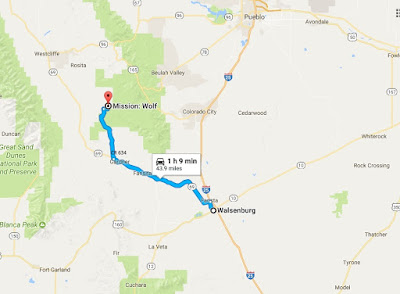 We recently drove out through the wide open countryside approximately 28 miles to the tiny community of Gardner.  Two miles past Gardner is County Road 634 heading up into the mountains.  As you turn onto the county road, please zero out your odometer, so that you can watch for the turn-off to the mission located at 13.2 miles.  You'll be glad you did, as the drive through the wilderness will shake your confidence as to how far you've actually gone! 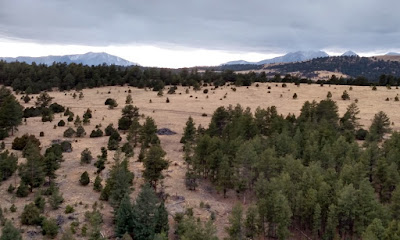 The drive varies from open wooded to more heavily wooded. 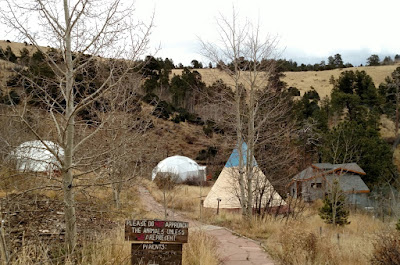 Mission Wolf is a private non-profit organization established to provide wolves and wolf/dog hybrids sanctuary, as well as, to educate the public about wolves.  They are proud that their facility utilizes solar power, has greenhouses for growing vegetables and recycles materials for constructing buildings.  They even process used cooking oils from restaurants to power facility vehicles!  The tipi you see is one of several and are housing for the volunteer staff.  The white domes are greenhouses.  The wood buildings serve various functions. 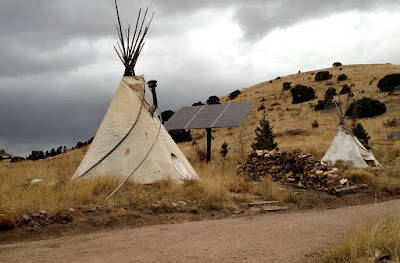 The public can make arrangements for an overnight stay in a tipi.  You can read more about Mission Wolf on their website:  Mission Wolf 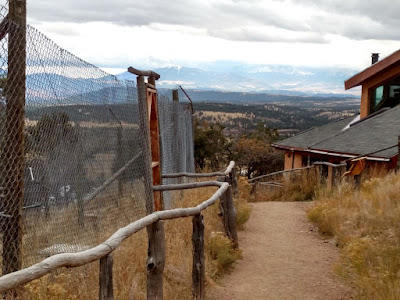 This is the walk up to the wolf habitats.  The website shows there to be 30 wolves, including wolf/dog mixes, at the sanctuary.  You can read about the individual wolves on their website. 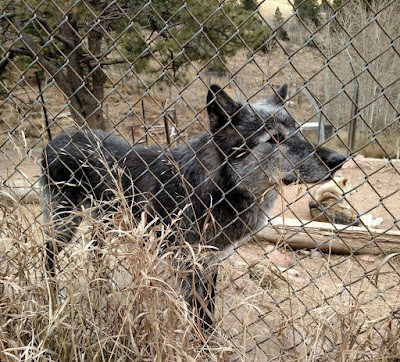 The first pen houses three wolf/dogs that serve as ambassadors in meeting the public at educational presentations. 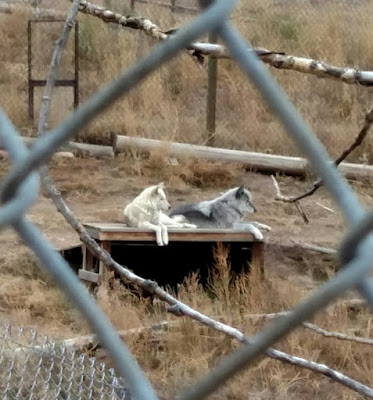 The white wolf is a male Artic wolf named Illiamna.  He was born  on April 14th, 2009.  He came to Mission Wolf as a pup with 3 siblings and 4 Canadian Grey Wolf Pups.  They had been in a Wildlife Safari Park in South Dakota prior to coming to the sanctuary.  Raven is a beautiful female Silver Wolf born on April 7th, 2002.  She and her sister arrived at the sanctuary when they were 4 months old.  Her brothers were chosen for a movie project, but since Raven and her sister weren't also chosen, they were in need of a home.  Raven and her sister, Magpie, needed their space as they grew older.  Illiamna and Raven became great friends.  All the animals at Mission Wolf are spayed/neutered. Not being absolutely sure that I'm labeling the individual wolves correctly, I would like to apologize to anyone reading this blog who knows the wolves personally.  I think what is most important is getting the stories of how they came to live at the Mission Wolf Sanctuary heard.  With that said, I believe this wolf is Orion.  Orion is a male black wolf, who was born in Tennessee in the spring of 2005.  He was rescued by a woman living in Vermont who kept wolf-dogs.  When she realized that she wouldn't be able to socialize him out of his skittish "wolfy" behavior, she contacted Mission Wolf.  Orion developed a strong bond with Soleil, a white wolf-dog.  They are never seen more than a few feet apart! 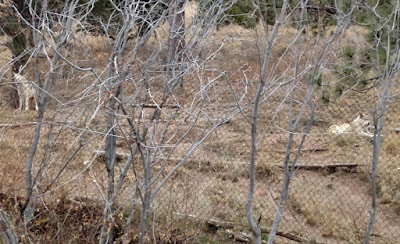 When we got to the highest point of our walk, we started a group howl with these wolves.  It set-up a howl across the habitats! 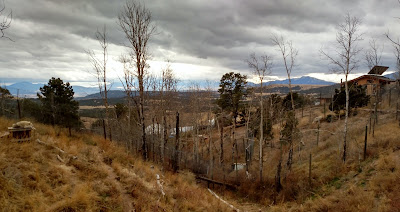 This is the view out over some of the lower habitats. 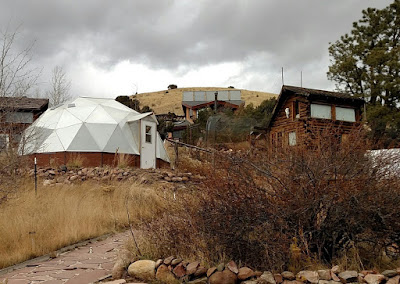 We visited some more wolves and then took a tour of the domed greenhouse.  After a visit to the gift shop, we were free to wander the route of our guided tour unaccompanied by a guide.  The tour left us with mixed emotions.  The operation as a whole was impressive, but the statistics regarding wolf/dog hybrids was depressing.  The law allows for people to own them, but it appears that the hybrids as a rule only function well in homes up until the age of two, at which time they are euthanized or sent to sanctuaries!  It left us feeling that the law should probably be revised.
at 1:33 PM 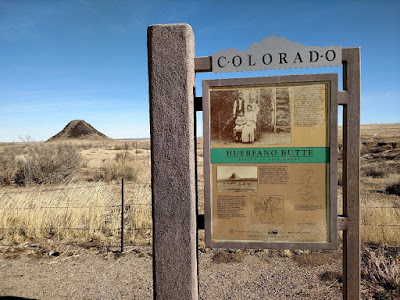 Ten miles north of Walsenburg near the Huerfano (War fuh no) Wind Farm sits a 300' mound of black rubble called Huerfano Butte.  To a geologist it may be impressive, as the core of what was once a lone volcano out in the wide open spaces.  It was named Huerfano Butte, as Huerfano means orphan.  It sits about a half mile off the Highway 25 observation turnout, so without a great camera, the picture one can get of the butte is equally unimpressive.  It sits on private property and isn't accessible without special permission. 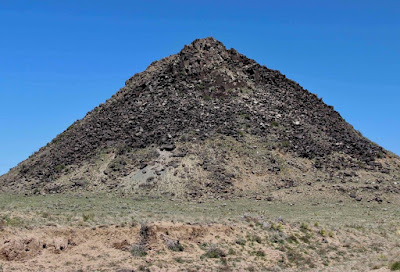 This Internet picture is a little more impressive.  It is a landmark that sits along a historic trappers trail.  A bit of history about the butte that I found interesting, was that back in the day of the migration of people westward to California, it was proposed that a statue be placed atop the butte pointing the way!  It apparently never came to be, though.  Whether one finds Huerfano Butte impressive or otherwise, it is a local landmark with geological and historical significance!
at 6:37 PM