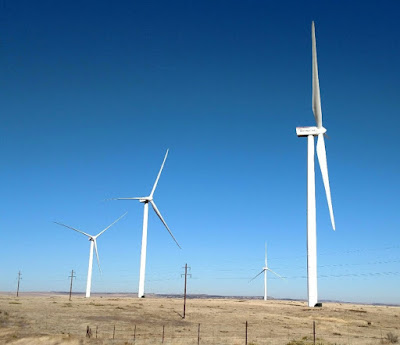 Ten miles north of Walsenburg, CO along Interstate 25 are four beautiful wind turbines.  This is the Huerfano River Wind Farm.  The farm uses Sany-made turbines and feeds into the San Isabel Electric Association grid.  It was built in 2013.  We thought the dirt roads between the turbines might be a fun place to take our dogs for runs, but as suspected the turbines are fenced off and on gated private property.  There is a county road that parallels the wind farm and is nice for a slow drive near the turbines. 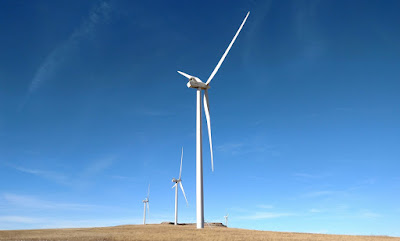 On a clear day off in the distance you might notice a large number of wind turbines.  Going east on Hwy. 10 approximately 10 miles, you will encounter the 34 wind turbines that make-up the Peak View Wind Farm.  The turbines are widely spread on both sides of the highway and fenced off on private property.  This Black Hills Energy project was completed in October 2016.
at 1:49 PM