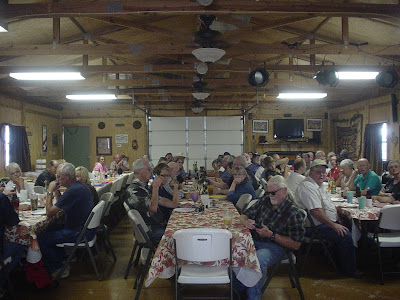 We spent Thanksgiving with our large Miller Creek RV Park family. Everyone brings a prepared dish to contribute to the meal, as well as, a nonperishable food item for the local food pantry. 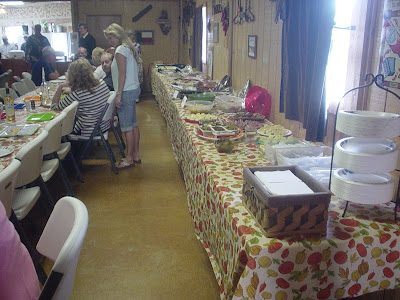 The tables along the wall hold a variety of foods to accompany the 6 turkeys, 6 hams, and two beef briskets provided by the park. The lady standing in the foreground is Judy, one of the RV Park owners. 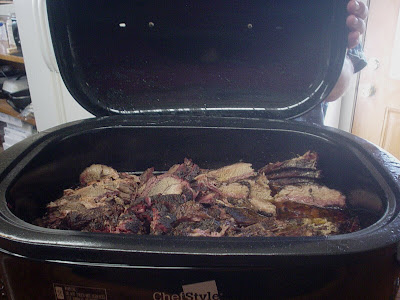 Roy and another park resident (Ron), took shifts through the night monitoring the temperature for the 12 hours it takes to smoke the beef. They achieved their goal of perfection! 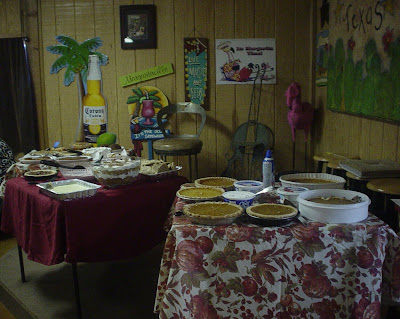 There were lots of desserts to choose from! 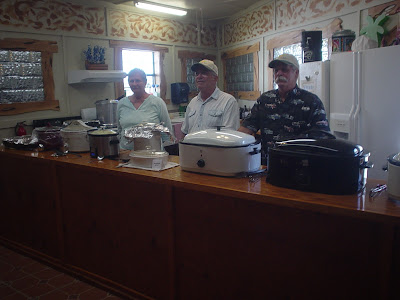 The couple to the left are the RV Park's workkamper cooks. Not only did they do an excellent job with the Thanksgiving dinner, but they cook an excellent meal every Wednesday for all to partake of. On the right is Paul, Judy's husband and RV Park co-owner.
at 4:02 PM

Blanco held a parade for Veteran's Day. Here are a few glimpses. 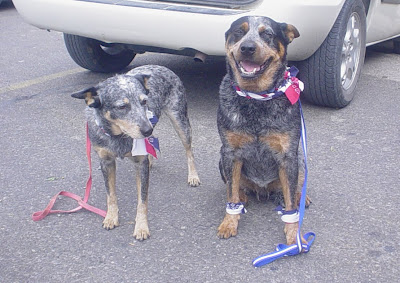 A couple of cute spectators! 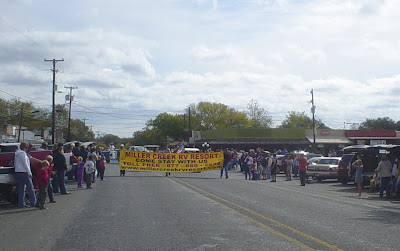 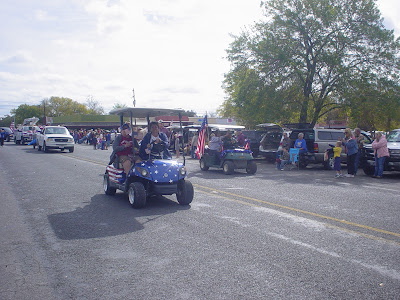 The golf carts are from the Miller Creek RV Park. That's Fran, the office manager, driving the star spangled cart. 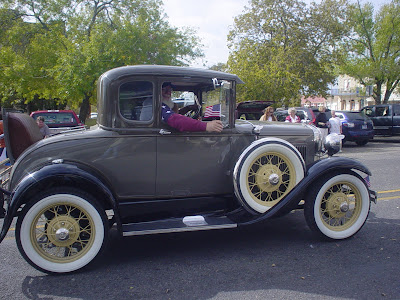 Cool car, with a patriotic passenger. 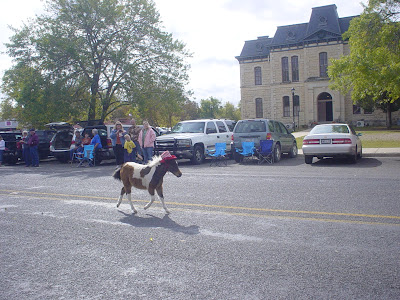 This little cutie was able to trot along the parade route untethered. It was following a group of cowboys and horses, so maybe Mama was up ahead. Waaaaaaaay cute!!!! 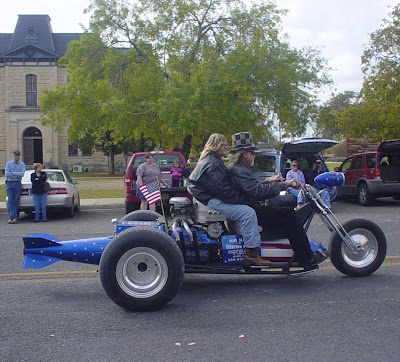 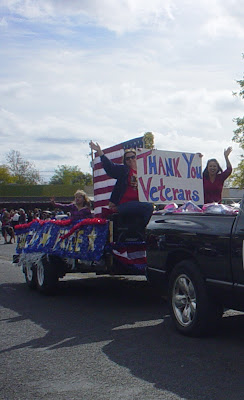 The sign says it all: Thank-you veterans! Very nice hometown parade!
at 3:37 PM 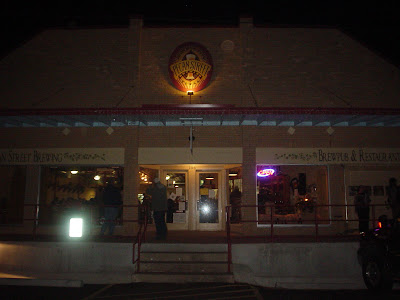 The Pecan Street Brewing Pub & Restaurant in Johnson City had its grand opening August 27th. It is the newest brewery in Hill Country. 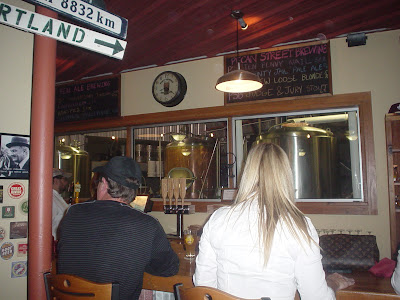 As you walk through the front doors, you enter a spacious room with the bar and brewery to the right, and lots and lots of tables. The atmosphere is casual with beer, burgers, and pizza as the main fare. There is free wi-fi, pool, darts, and live music Friday and Saturday nights. 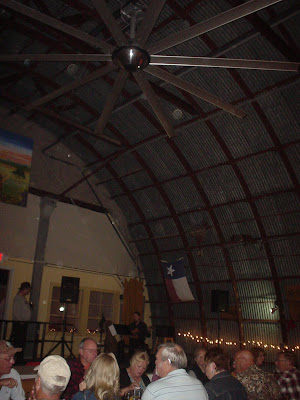 Through the back door of the main restaurant is an attached Quonset Hut where the live music is performed. Food is also served there, but the atmosphere is so laid back that a person could go weekends just for a beer and a show! On Fridays the RV park has planned outings. The diners pictured are from the park. Check out the huge ceiling fan.
at 1:08 PM 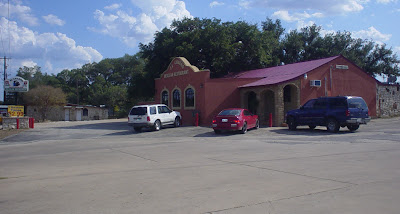 El Charro in Johnson City is one of our favorite places to get breakfast tacos. They can be eaten at the restaurant or picked up as take-out. Several of us at the RV park enjoy them as take-out. 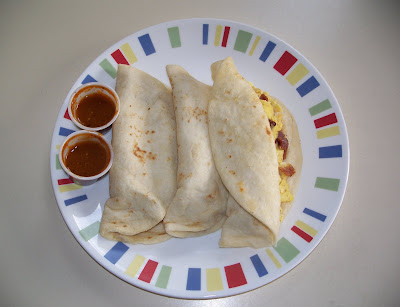 For just $2.99 you get 3 hearty breakfast tacos filled with eggs, potato, cheese, and your choice of sausage, bacon, or chorizo. They are all excellent! I love the red taco sauce, although, there is a hotter green sauce. 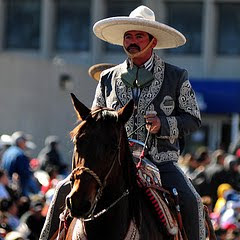 Out of curiosity I decided to look-up the translation of the restaurant name, El Charro. El means "The", and a charro is a traditionally attired Mexican cowboy........ 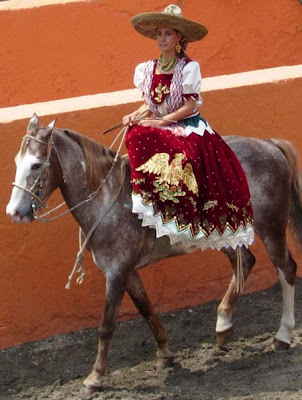 ..or cowgirl. I found that there are charro associations and that charros perform in charreadas (Mexican rodeos). Wow, so much learned from two little words! 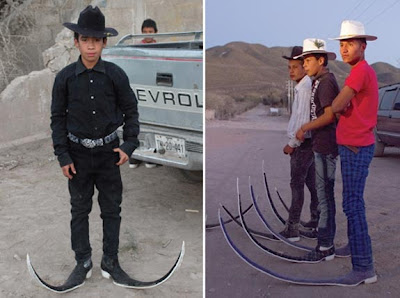 During my research into charros, I came across pictures of these odd boots. They are called Mexican Pointy Boots, and are a fad designed in Matehuala, Mexico for dancing to a form of music called, Tribal. I haven't seen any in person, yet, but the fad has made it's way into the southern states, especially where there are communities of Mexicans from Matehuala!
at 2:13 PM 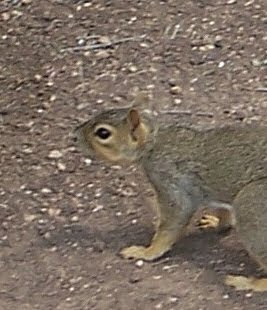 One Summer day I noticed this Western Gray Squirrel coming across a branch toward our picture window. As it got closer I noticed what looked like a large growth on its chest. I'm saying to myself, "What is on that poor squirrel's chest? Looks like a tumor. Could it be a baby clinging to the chest?" Hmm.........??? 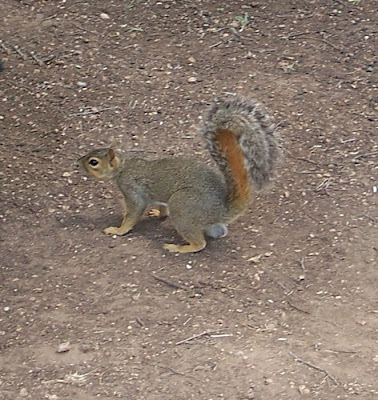 With a different visual angle, I say to myself, "WHAT???" I begin questioning the absurd probability that I've only seen female squirrels in my 59 years! That can't be! 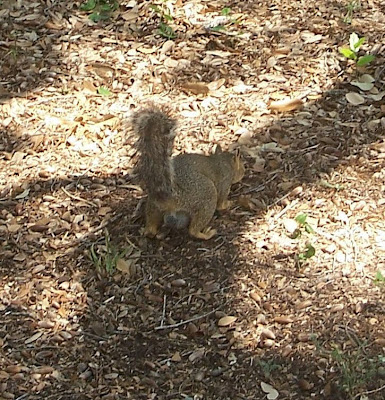 Not only is this a male squirrel like I've never seen, but he's packing nuts as large as I've seen on large dogs!!! Kahuna, as we named him, has to straddle his package to the point it looks hard on his hips, and one has to worry for his safety, as he jumps though the tree branches! Off to the internet for research! The first thing I learned is that there are a variety of Gray Squirrels. There are Eastern Gray Squirrels, Western Gray Squirrels, Arizona ones, and Mexican ones. Researching how to tell a squirrel's gender led me on quite a chase. The article, "How to Tell a Male Gray Squirrel from a Female Squirrel", gave a method of trapping a squirrel, so a person could turn it over and look. The urinary opening is close to the anus on a female and further away on a male, just like a cat. No holding back on our indepth reporting! The next article, "The Differences in Male and Female Squirrels", says "only by turning them over can you see the physical differnces between male and female squirrels." There's a lesson in not believing everything you read! One more article reports that male and female squirrels look alike! Further research indeed confirms that male and female squirrels are not dimorphically different. Dimorphic is the new word I picked up in my research. It refers to the male and female squirrels having similar looks when it comes to size, weight, and coloration. Finally, on an "everything you want to know about squirrels" website, I found an explanation that seems to solve the mystery in part. Here is the website and an exerpt from it:

"Although males may be sexually active all year round, they usually exhibit a redundant phase -- typically late autumn/winter -- during which there is testicular regression (i.e. the testes retract into the abdomen and the scrotum is empty). In Grey squirrels, testicular regression is very pronounced: the testes shrink from about 7g to 1g (86% reduction in size), while the paired bulbourethral glands reduce by about 70% and the prostate decreases by some 75%. During late winter, the testes grow into the scrotum and reach full size by the beginning of the breeding season." 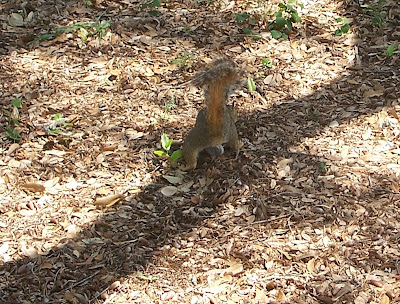 Here's one more look! Even though I understand the technical description of this sexual cycle of male squirrels, there's still the unanswered question of why I've only seen one obviously male squirrel in my life. Seems I saw a slight reference to Western Gray Squirrels in regards to the obvious bulge. I've heard the phrase for a number of years that everything's bigger in Texas! Maybe retired life is giving me time to notice squirrel nuts! I don't know, but we report it all from out here on the road!!! :-)
at 4:09 PM