Have You Ever Wondered? 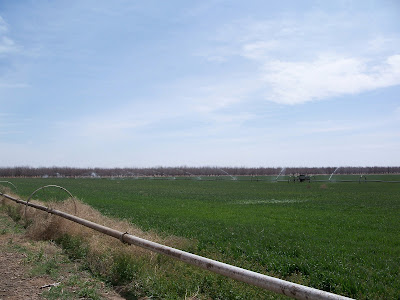 Have you ever seen this irrigation system and wondered how such a wide expanse of pipe is moved across the field?  Roy and I first saw them during our years in the high desert of Idaho.  Without extensive irrigation this lush green farm would be desert! 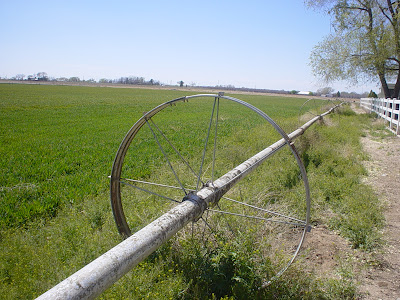 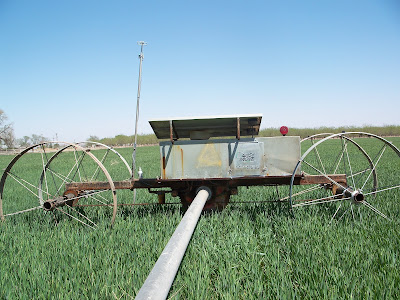 In the center of the entire expanse of pipe is a carriage.  This brand is called Easy Move! 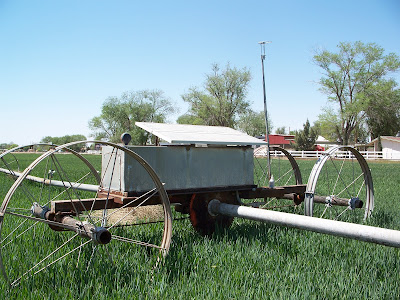 It has a solar powered electric motor.  The irrigation pipe rotates with the wheels, as the carriage moves.  The farmer who owns this unit walks slowly ahead of the carriage, but we have seen others rolling on their own while the farmer is working elsewhere in the field. 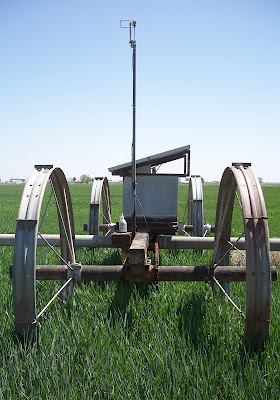 The mast on the carriage is most likely an antenna for remote operation, but could be a sensor.  Irrigation control units can be set for the frequency of irrigation, the start time, the duration of watering, and for various sensors to modify the irrigation system's actions. 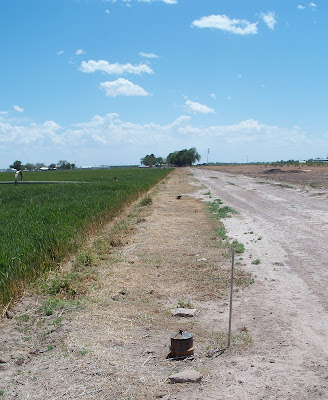 At the edge of the field is an underground water line with access heads placed every 30-40 feet. 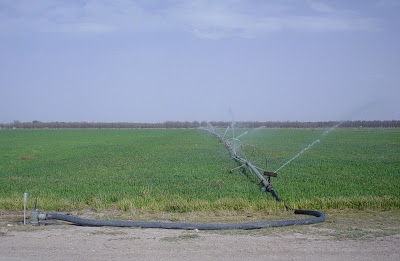 A large hose with a metal coupler attached sets down on the underground water line heads.  The brown rectangular metal piece standing up near the water stream closest to the road is a shield that diverts the spray so it doesn't shoot out into the road. 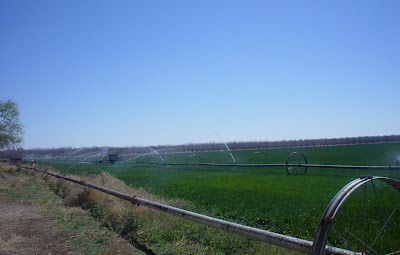 When the irrigation system is nearby and the wind blows through the spray, it becomes like a giant cooling system!  Brrrr!  We are glad to have gotten a chance to learn about the water line irrigation system!
at 9:00 PM 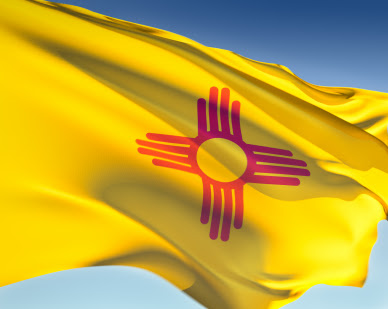 The Zia sun symbol is on the state flag of New Mexico.  It is seen on buildings and in decorative items.  The Zia people are a branch of the Pueblo community.  The Zia are known for their pottery and use of the sun symbol.  The following explanation of the symbol is quoted from http://en.wikipedia.org/wiki/Zia_people:

"The Zia Indians of New Mexico regard the Sun as a sacred symbol.  Their symbol, a red circle with groups of rays pointing in four directions, is painted on ceremonial vases, drawn on the ground around campfires, and used to introduce newborns to the Sun.  Four is the sacred number of the Zia and can be found repeated in the four points radiating from the circle.  The number four is embodied in: 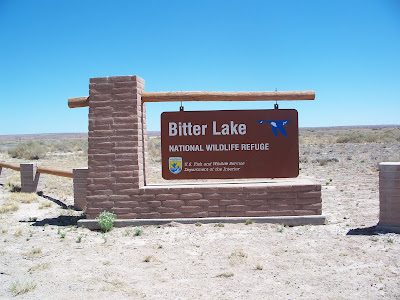 Bitter Lake National Wildlife Refuge is located 10 miles northeast of Roswell, NM in the desert.  The refuge is comprised of 24,536 acres.  It was established as a refuge in 1937 and is managed by the U.S. Fish and Wildlife Service. 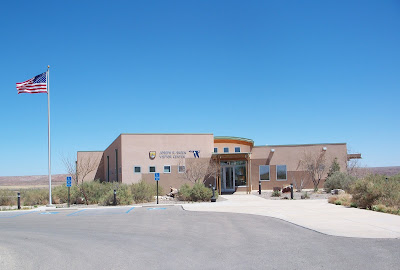 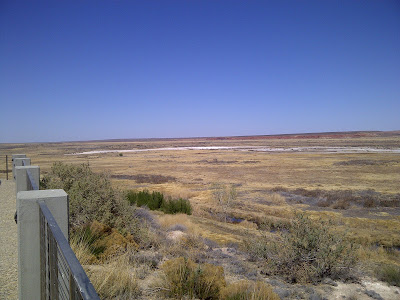 There is a huge deck at the back of the visitors center that overlooks the lowland area of Bitter Lake.  At times, portions of the lakes are dry.  Biologists monitor the water level in the lakes and will have water brought in to supplement them, as needed. 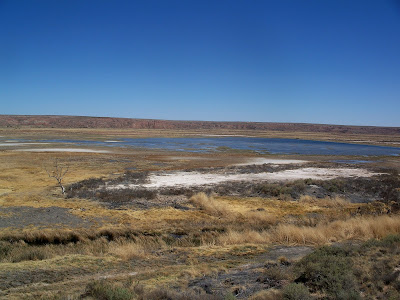 The biologists also monitor the salinity.  Bitter Lake can often exceed twice the salinity of seawater!  Throughout the park are spring fed lakes and sinkholes.  The Pecos River flows through the refuge, also. 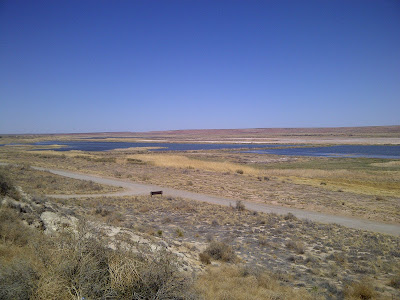 There is an 8 mile self guided driving tour through the park with 3 overlooks.  There are a few short observation trails to hike and a 4 mile bike trail. 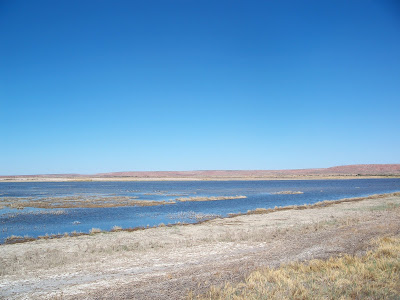 Be sure to bring your binoculars, so you can truly see the variety of wildlife.  The park brochure reports that more than 360 species of birds, 55 species of  mammals, and 50 species of reptiles and amphibians have been seen on the refuge.  It is also home to 28 species of fish and 100 varieties of dragon and damsel flies! 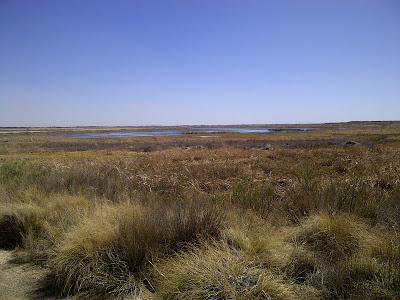 One of the things I personally love about the desert is the variety of textures and subtle color differences in the plants, along with the complementary soil and rock colors.

Who is Poe Corn?

When driving around Roswell you'll eventually drive past Poe Corn Park or find yourself going down Poe Street.  Poe Corn is probably one of the more unusual names you have heard, and you'll wonder; Who is Poe Corn?  With a little Internet research, this is what I found. 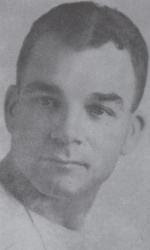 Poe Corn was born January 12, 1909, in Roswell, N.M., the 19th of 20 children.  After attending the New Mexico Military Institute, he was a three-sport letterman at the University of New Mexico in basketball, football, and track.  He graduated in 1932 with a degree in Education.  Poe Corn was the head football, basketball, and track coach at Roswell High School from 1932-1949.  His football teams compiled a 102-57-12 record while his basketball squads were 207-93 over that span.  In 1938, Poe started women's physical education in the Roswell Public Schools.  Form 1948 until his death at age 63 on July 31, 1972, Poe served in a variety of roles, as the Roswell Public School's Activities Director, Director of Athletics, and Physical Education Director.  He received numerous accolades for his accomplishments.  One honor was having the Roswell Basketball Tournament renamed as the Poe Corn Invitational Tournament. 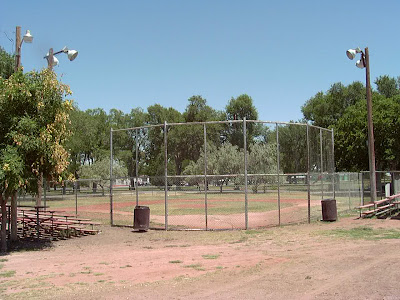 In 1976 the Poe Corn Park was established.  It is adjacent to the Boys and Girls Club, which houses a swimming pool.  The park has a lighted baseball field, public restroom, shady picnic area, and ......... 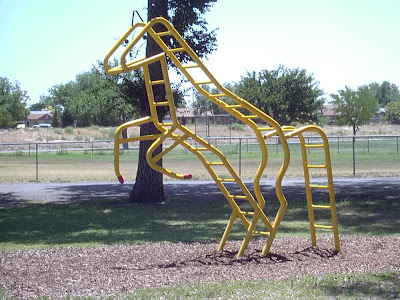 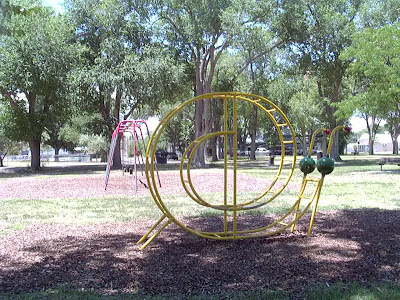 I'm glad we took the time to learn about Poe Corn!  As for the unusual name, there seem to have been a few people with the same name in the Roswell area over the years, and there is still one person in the Roswell phone book today with the name, Poe Corn!