After living in Brimley for 3 months, getting ready to leave is like a minature version of moving again. I've had several shelter projects in the works, and have been trying to wrap them up. Roy has been doing some major camper projects, and is trying to get them to a stopping point. I have projects I had hoped to do at June and Earl's home that I'm sorry I won't get to. We extended our stay from the 25th to the 29th to fit in a bit more. We are sticking to our original travel plans except for having to condense our travel time. My goal on the road is to become Facebook literate so that we can all stay in touch.
at 11:38 AM

Fall is in the air and it's time to move on. It's been a great Summer with our friends, and we'll be sad to leave. Our plans are to leave Brimley August 25th and head west on M-28. We would like to take-in Oswald's Bear Ranch, and the Nature's Kennel Iditarod Sled Dogs Tour before leaving Michigan's Upper Peninsula. Once we've visited these attractions, we'll take a week getting to Louisville, Kentucky for my niece's wedding on September 3rd. At present, we are thinking we will stay in Corydon, Indiana during the month of September.
at 11:55 AM 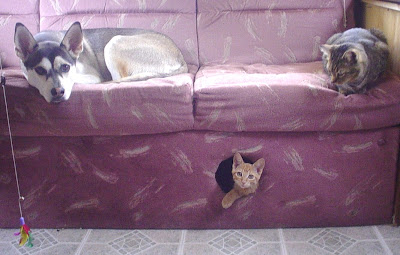 Look who's come to live in the cat cave! I couldn't leave my little wheelchair kitty behind. We've named him Otis. I told Roy it wasn't logical adding one more pet to our camper, but that I just had to see the end of the story for this kitty. The end of the story for Otis is that he will have a very pampered life on the road with us! He has two big dogs, a male cat, and the two of us wrapped around his little paws!

He is doing great getting around the camper without his wheelchair. He uses the walls to walk along, but sometimes practices walking without support. We've made some modifications to make life easier for him, and Charles is teaching him to wrestle. Otis is a quick study and they are having great fun. Charles is finding having a cat friend to play cat games with is much more enjoyable then harassing the dogs. We'll be posting videos of his progress. 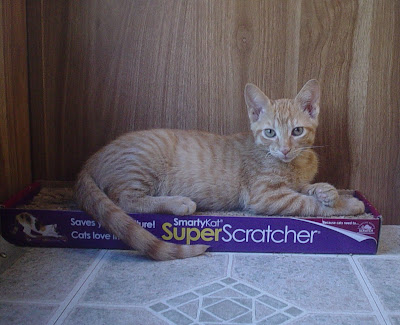 Isn't he a cute stripey boy! He's quite the lesson in determination.
at 9:46 AM

The vinyl door below is what originally came with the camper. As pet owners, we have always disliked it. 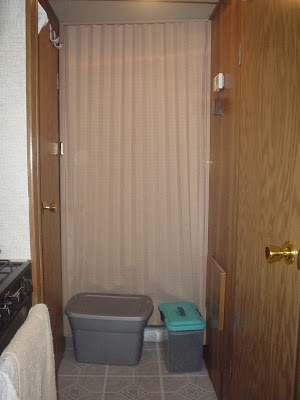 To keep the dogs and cat out of the bedroom we have had to take up floor space with things to block the wide gap at the bottom of the door, and to wedge it tight so it couldn't be pushed open. Since living in the camper, we have also discovered that the vinyl door hampers air circulation and causes the bedroom to be muggy. We leave the door open at night and have taught the dogs to stay out of the bed, but the cat........Well, you know cats. 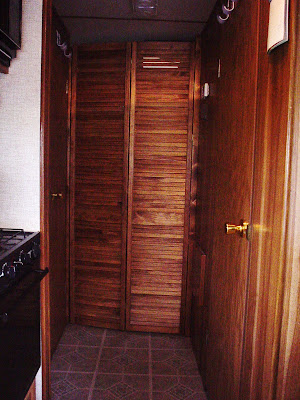 We love our new door! Roy stained, framed, and hung it. He even placed magnets so that the door is held shut by them. No more tubs taking up floor space and no gap at the bottom for the cat to slide under! The bi-fold door solves another problem we've been brainstorming a resolution to. 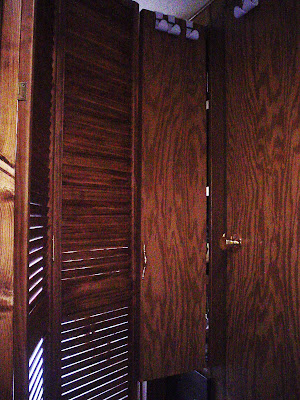 We have discovered that arching the bi-fold door and pulling another closet door to it, makes a nice dressing area. This view is from the bedroom. The bed provides an area to lay out clothes and a place to sit. The bigger closet to the right is where our clothes are kept. With the camper being as small as it is, prior dressing required all the blinds to be pulled closed. What a super improvement just a door can make!
at 10:18 AM

This is the 3rd year that Friends of Caring Animal Shelters and the Michigan State University Veterinary Program has hosted a free spay and neuter clinic for dogs and cats of low income families. Chippewa County is only one of several areas in Michigan benefiting from the MSU program, as the veterinary students and their supervisor are on the road for three weeks in August holding clinics. Our clinic is volunteer run and the only requirement of the hosting communities is to provide the most basic of housing and food for the students. Both housing and food were donated by area residents and businesses. In two days the veterinary students altered over 150 animals! The Kinross police department has noticed such an impact in their community that they have offered to help with the post-clinic packing and loading. Enjoy the picture tour of this event. 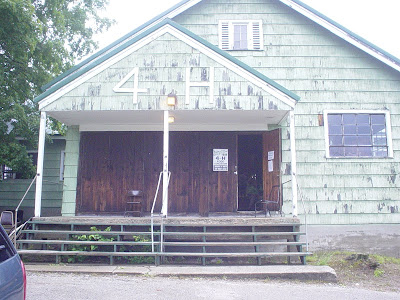 The clinic was held August 5th and 6th in the 4H building at the fairgrounds in Kinross. 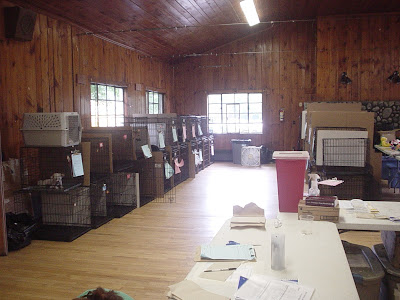 This is the dog waiting area. 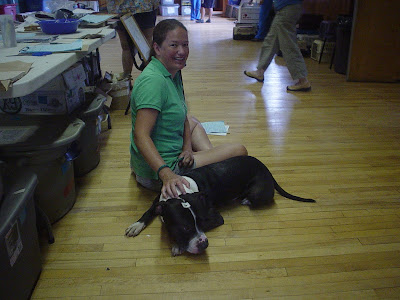 This volunteer is consoling a worried patient. The cats and dogs were identified in many ways, one of which was a number written on masking tape placed on their heads. 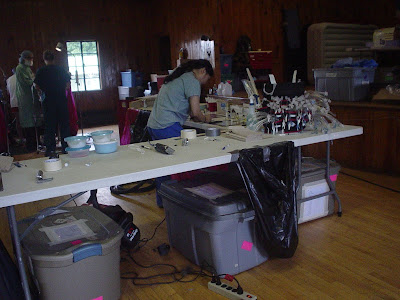 This is the surgery prep area. The students all seemed very efficient. 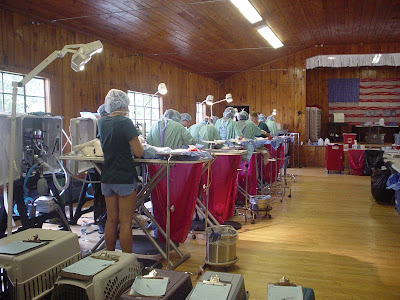 This is the surgery area. The stage had the instrument sterilization area. 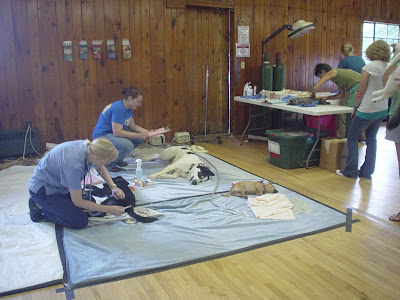 This is post-op. Animals were monitored closely for their progress towards recovery. Other procedures such as nail trimming were done there, also. To the right in the picture is the cat neutering station. Dr. Chadwick, the supervising vet, is performing the operation. 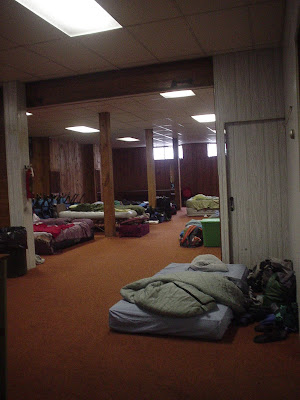 The students slept downstairs in the 4H building. 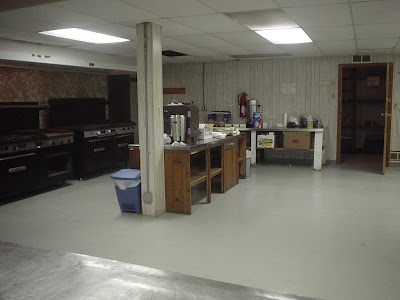 A nice kitchen was downstairs close to their sleeping quarters. The kitchen was well stocked with a wonderful variety of excellent foods. Isn't it great what people can accomplish working together for a great cause!

Here are a few cat room photos that are quite different from the formal pictures I used to take. 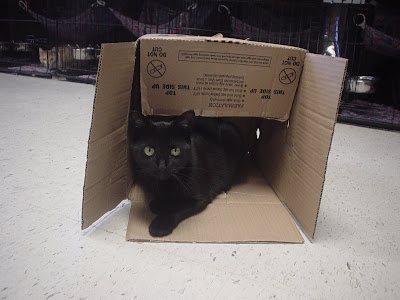 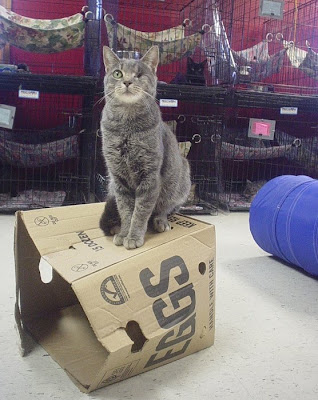 We don't know how this guy lost one eye, as he came to the shelter this way. Doesn't he look regal and cute at the same time sitting on that egg box? 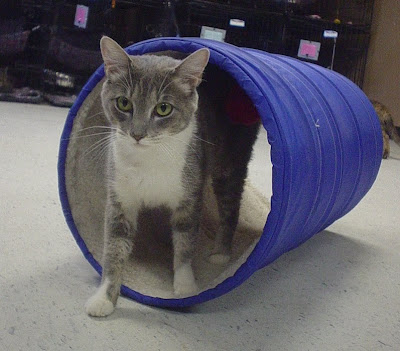 Each cat can have 3 pictures and a video on their personal petfinder.com page. Usually a face shot is posted first and then some body shots.

Well, I guess I've earned the title of Crazy Cat Woman, as this is my idea of fun! 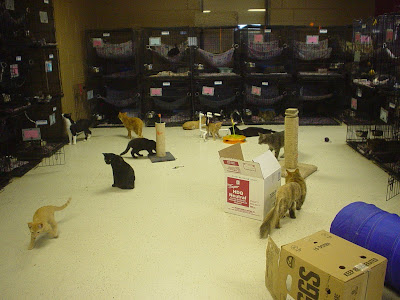 I like to treat the cats to time out of their cages, and I've discovered it's a great way to take photos for posting on petfinder.com. We have quite an interesting menagerie shown in the above picture. To the right of the box with the red square is a cat sporting a haircut called a Lion Cut. Here's a closer look: 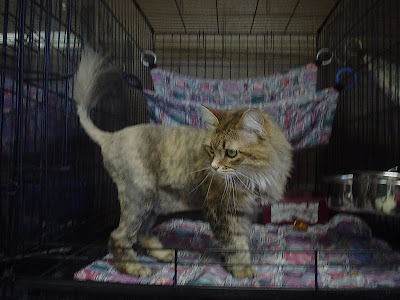 Isn't it cute! When long-haired cats come into the shelter extremely matted, the only thing to do is shave them down. It's not as difficult as one might think. Once the cat figures out that those skin pinching mats are coming off, they will actually lean into the clippers to help out. 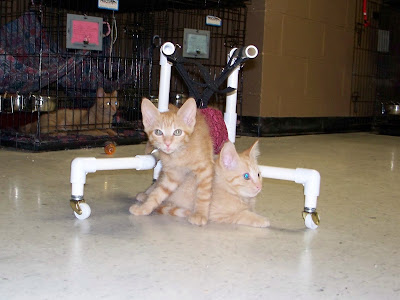 Meet Tom and Jerry from the cat room photo. These two month old kittens have a muscle coordination disability called Cerebellar Hypoplasia. I've been working with them since the beginning of June doing exercises, massage, and nutritional supplementation. I recently discovered an example of a homemade cat wheelchair online. Roy built it for less than $20. The purpose of the wheelchair is to provide independence while the kitten builds-up its muscles and coordination. The prognosis for Tom and Jerry is that as they get older they will learn to compensate for their disability. Check out how well Tom did with his new wheels on his first day of using it!!!

If you didn't get enough of seeing him in action, look-up his other 4 videos on You Tube labeled Cat Wheelchair. Two excellent You Tube videos regarding their disability is: This is Charley and Feline Hypoplasia "Gordon". 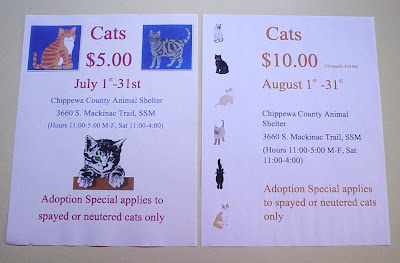 When I'm not working with the cats directly, I've been making and posting flyers promoting their adoption. A quick count of cat adoptions in July is 35!!!