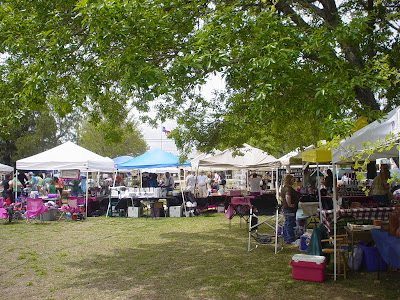 It's a local tradition for the small communities, as well as, Austin to hold Market Days on their own particular weekend of each month. It's a chance for crafters and other vendors to sell their goods. 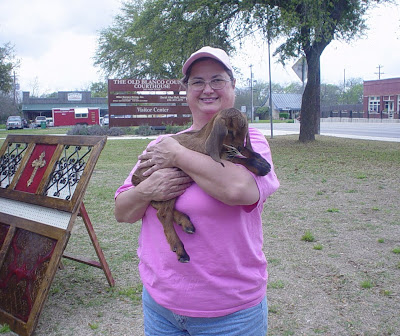 A vendor selling dairy goat products at Blanco Market Days had a couple of cute babies on display. I just had to hug one! Awwww! It was as sweet and soft as it looked. The owner reports that this little cutie will grow to be around 250 pounds. Love being out in shorts and a tee shirt in March!
at 4:57 PM 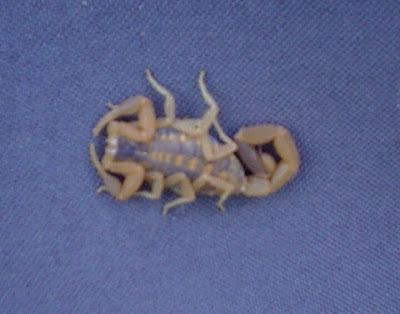 Here it is. My first real scorpion! I found it in the folds of a swing canopy that was laying on the ground. My Internet research shows it to be a Striped Bark Scorpion. Laying its tail on its side while at rest is one characteristic of this type of scorpion. It was only about an inch long curled up, but unfolded with its tail straight out behind it to an average adult length of approximately 2 3/4 inches. I had hoped to get a picture of it with its stinger curled over its back, but when I touched it with a stick, it ran very fast for cover. It kept its tail stretched out straight while running. It was intimidating looking enough at rest, but when it uncurled to its full length, it appeared even more menacing. 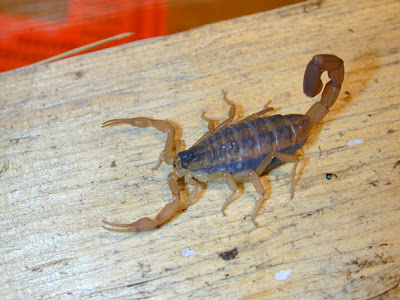 Here's an Internet picture of a Striped Bark Scorpion ready for action. Though not aggressive, the scorpion's close association with humans makes envenomation relatively common. The sting can be extremely painful. I'm told by a local that it's a bit worse than a wasp sting. For some, the worst passes in 15–20 minutes, but it's not uncommon for the wound to remain very painful with a numbing sensations for 2–3 days. Most scorpion's venom is comparable to a bee's, and not of the same magnitude as a poisonous snake like many of us think. Out of 90 known species in the United States only one is considered lethal and that is the Arizona Bark Scorpion. Countries such as Africa have higher percentages of scorpions that are considered lethal. There is an anti-venom for scorpion stings, but it is not recommended unless an individual has an allergic response to the sting or you are stung by one that is considered lethal, such as the Arizona Bark Scorpion. 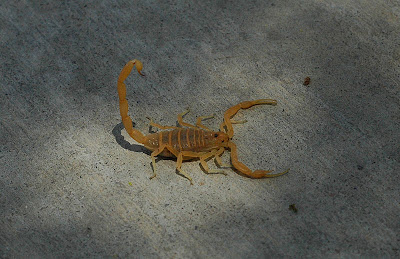 This is an Internet picture of the Arizona Bark Scorpion. It is found in the deserts of Arizona, California, and Utah. An interesting rule of thumb regarding scorpions is that the smaller their pinchers the more venomous they are. The ideology behind this saying is that if they have larger pinchers they can capture their prey and use less venom. The smaller the pinchers the more they are reliant on venom to do the job. Here is the recommended treatment for scorpion stings as per the Texas Poison Center:

1. Recognize scorpion sting symptoms: immediate pain or burning, very little swelling, sensitivity to touch, and a numbness or tingling sensation.
2. Wash the area with soap and water.
3. Apply a cold compress to the sting.
4. If you experience difficulty breathing or a rash, call 911 or go to the emergency room.

Knowing the habits of scorpions will help to avoid stings. Here are a few things you should know. It is common for scorpions to climb trees and walls. They like dark quiet places and tend to come out in the evening to hunt. They are active foragers that do not burrow. They are likely to be nestled in dead vegetation, fallen trees, log and rock piles, as well as, anything left on the ground that provides a dark hiding place. They hunt crickets, roaches, and earthworms and will likely be found in the same places as their food source. During high outdoor temperatures scorpions will come into homes wherever they can gain entrance, especially if the bugs they seek are present. It is advisable to block their sources of entry with steel wool. Roach spray will also kill scorpions.

Now that we are all scared, lets try to redeem these creatures. In 2004 a Guinness World Record was set by a 27 year old Malaysian woman who spent 32 days living in a glass case with 6,069 scorpions. She was only stung 7 times. She emitted a yelp of pain, but did not require any medical treatment.

I think if we are mindful of leaning against things, watch where we put our hands, wear closed toe shoes at night when they are active, and keep in mind their habitat, we can greatly reduce our chances for an encounter.
at 7:57 AM

Vanishing Texas River Cruise is promoted as the premier ecological cruise of Texas. Its website states that the cruise provides spectacular views of Lake Buchanan, the Colorado River, native Texas wildlife, waterfalls, and world-class bird watching including 25 nesting Bald Eagles. Wow, this is my kind of event! 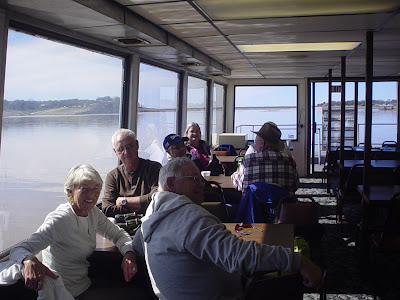 We were warned ahead of time to dress warmly as being out on the water early in the day would be cold. I wore my Winter coat and stocking cap and found it to be perfect for staying on the bow of the boat. There is an enclosed lower deck, a partially enclosed upper deck, and the open bow. Pictured are some of the RV park crowd. 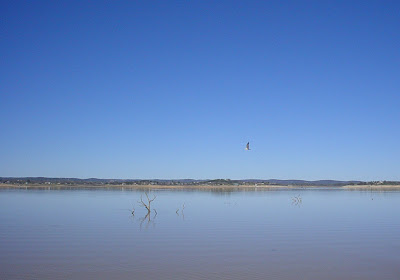 Being psyched by the description of the cruise, I hadn't really given much thought to the effects of the draught. The lake was down 50' and the waterfalls were dry. The water level in the river was too low to navigate. These snags haven't been seen since 1998! On the positive side, the lower water levels have uncovered many old settlements around the area for historians to study. 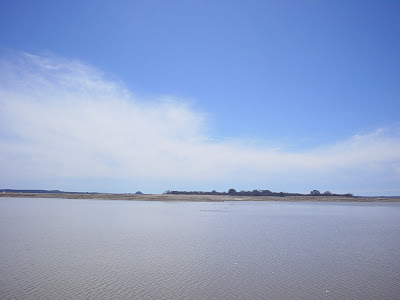 We saw lots of Cormorants and Pelicans at a distance. Thank goodness we grabbed the binoculars on our way out the door or we really wouldn't have seen much besides specks like in this picture. The cruise does rent binoculars. The black specks you see in this picture on the water was actually a very cool formation of Cormorants. My digital camera's telephoto lens wasn't adequate to the task of capturing bird photos. The Eagles have also moved on. People that went on the cruise the previous year and enjoyed it said that the Eagles were so far away in the trees along the shoreline that even with binoculars you would just catch a glimpse of their white feathers. Even though the draught eliminated much of what was promoted from previous years, we still enjoyed our two hour narrated cruise and felt it was worth the $18.60 per person rate.
at 12:42 PM