End Of The Road?

What do you do when you find a location that has that special something you like, you’re feeling a little road weary, and a family member’s health is crashing?  You start to think about settling down.  It might just be home base for part of the year or looking ahead may be where we settle permanently.  We’ve started looking at housing options in regards to what we think our future holds.  Housing options are, of course, a matter of personal taste and available finances.  I’ll share just a few things we’ve discovered after living 6 years on the road in regards to housing.  Permanent structures are expensive to buy and require high priced utilities and amenities.  There is home and yard maintenance and permanent neighbors.  Getting into a home is more than we think we want to take on and financially for us would definitely impede our ability to travel.  We considered mobile home parks.  We don’t like the idea of paying for a mobile home only to have ongoing expensive lot rent.  Once again there are utilities and amenities to pay for.  The mobile home parks we’ve seen have small lots and permanent neighbors on all sides.  We agree that we could go with a mobile home, if it was on our own property.  There is still upkeep to consider.  Living in a home is isolating compared to the community found within an r.v. park.  Apartments are appealing for the lack of maintenance, but they are quite expensive and with two medium sized dogs and two cats, would be hard to find.  For our ages of soon to be 60 and 64, available retirement finances, and personal preferences, we have come back to life in an r.v. park being right for us.  Rents run around $350 a month plus electric, but water and dumpster service is provided.  Some parks provide the electric at the same low price stated.  Wi-Fi is often free.  Expansive cable t.v. is sometimes free, but generally runs $25-$35 a month.  There isn’t any yard work and one’s rig requires very little upkeep.  R.V. parks offer community activities from very minimal to activities every day of the week.  There is a sense of being looked out for by the park office personnel and people within the park.  It is a carefree lifestyle that borders on being assisted living!  One’s retirement dollars are maximized and whether one continues to travel or not the option is available.  We may upgrade to a larger rig in time.  These are just our observations and, of course, it’s all about personal choices for ones stage of life, health, and interests.  Our minds are open to options and we’ll know when the right fit comes along. 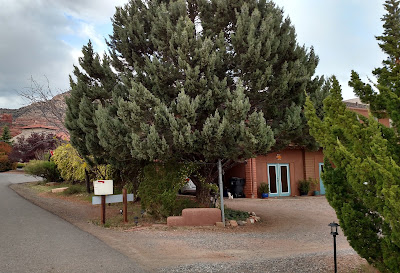 One of the things Roy and I have fallen in love with in Cottonwood, AZ is the massage school in nearby Clarkdale.  It has unfortunately, after 20 years in the area, closed its doors forever.  We are thrilled to find that Sedona, only 17 miles away, also has a massage school (pictured)!  After living near a massage school and reaping the benefits of it, we have wondered how we could ever again live anywhere that doesn’t have one!  When planning our trek up through California we actually chose communities that we were going to spend at least a month in, by whether they had a massage school!  Here is a great website we found for finding massage schools around the country:     http://www.massageschoolsguide.com/find-schools/

Roy has been battling Type II diabetes for about 10 years.  He hasn’t done well on medications and has managed it the best he could through exercise and diet changes.  The blood sugar numbers were reading high, but overall his sense of health was tolerable until recently.  The neuropathy in his feet was constantly painful and he was losing feeling.  His blood sugar was peaking at 400, when it should be below 100.  He once again tried medication that only served to make him sick 24/7.   In his recent Internet research for answers, he may have just discovered an eating plan that is going to save his life!  It is vegan and extreme, but as a nondiabetic who likes her sweets and breads, I’m finding it easy to do, as I feel the nutritional difference!  On February 15th Roy’s blood sugar hit 406, but by applying the whole raw foods diet set forth in Dr. Gabriel Cousen’s book, There is a Cure for Diabetes, as quickly and thoroughly as we could, his readings are now reaching 100 and sometimes make an encouraging dip below 100!  The pain in his feet is mostly gone and feeling is coming back!  He is riding his bicycle daily.  He has found it to be the most effective exercise in bringing his blood sugar readings down.  While we work on Roy’s health and mine incidentally, we’ll linger in Cottonwood, AZ learning the finer points of what there is to enjoy here!
at 11:55 AM 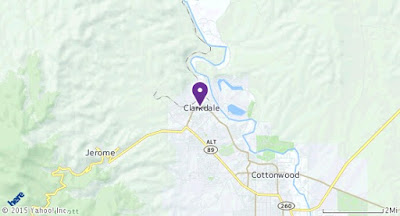 We decided to drive over to the historic community of Clarkdale located 4 miles from Cottonwood and 4 miles from Jerome.  Clarkdale sits at an elevation of 3,545' at the convergence of Bitter Creek and the Verde River.  The town was founded in 1912 as a company smelter town by William A. Clark, for his copper mine in nearby Jerome.  Clarkdale was one of the most modern mining towns in the world, including telephone, telegraph, electrical, sewer and spring water services.  It was an early example of a planned community. 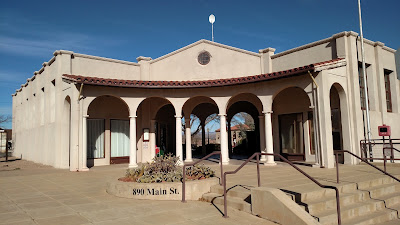 The town center and business district were built in the Spanish Colonial style, and feature the Clark Memorial Clubhouse and Memorial Library, both of which are still in use.  This is the town hall.  It sits on the corner of Main and 9th Street, which is the business district and boundary between Upper and Lower Cottonwood. 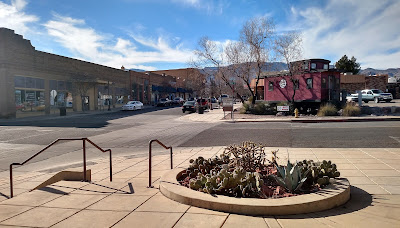 The entire original town site is on the National Register, as the Clarkdale Historic District.  The mine and smelter closed in 1953.  I love the cement work!  It seems to be done this way around town on sidewalk street corners. 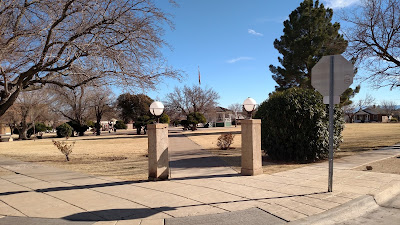 As many towns were in the past, Clarkdale was highly segregated.   Upper Clarkdale is the oldest part of the town and was designated for the engineers and executives.  It went from 9th Street/Miller's Hill west to 16th Street.  This is the formal park in Upper Clarkdale. 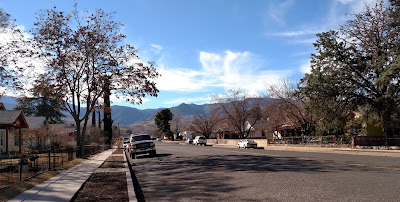 It is hard to capture a neighborhood, but this picture was taken in Upper Clarkdale at 13th Street looking towards 16th Street.  If you click on the picture to enlarge it, you can see a glimpse of the community of Jerome on the mountainside! 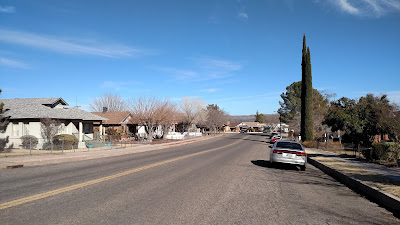 This is the same picture taking location on 13th Street, but looking toward 12th Street.  Lower Clarkdale begins at 9th Street.  The 2010 census for Clarkdale was 4,097. 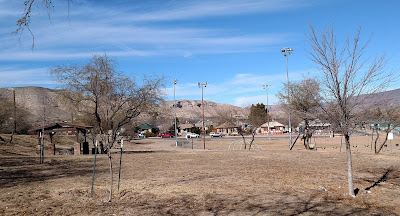 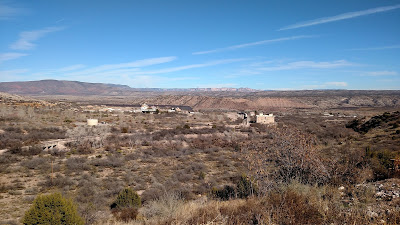 Off in the valley across Bitter Creek between the train depot and Verde River are Fiesta and Siesta Streets in an area referred to as Patio Town.  Patio Town has run down Four-plex government housing buildings and trailers.  There is a small playground for the children.  Patio Town is located to the right side of the picture.  The Verde Canyon Tour Train depot is located in the valley.  Check out its offerings online.
﻿
at 4:38 PM