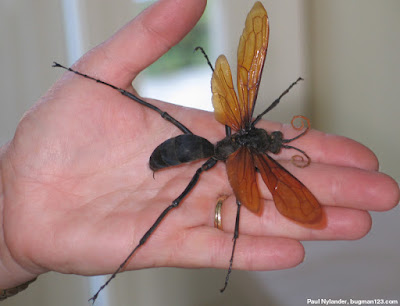 I was standing outside talking with a small group of people at dusk here in Camp Verde, AZ when a black elongated object appearing to be about 3" long did a pass through the crowd and a loop around me! Wow! What the heck was that zooming by like an angry hummingbird on a mission! That's when I was told it was a Tarantula Hawk Wasp and that they deliver one of the most painful insect stings. An Internet search confirmed that the wasp's 1/4 inch stinger does in fact deliver the second most painful insect sting in the world! Thank goodness, they are considered relatively docile and will rarely sting without provocation! You wouldn't want one to land on your clothes and attempt to knock it off with your hand. Maybe pulling your clothes away from your body would be the way to go. The pain of the sting is described as lasting about 3 minutes and being so immediate and excruciating as to shut down one's ability to do anything, but perhaps scream! Other than the possibility of an allergic reaction, the sting does not require medical attention. There are 15 varieties of this wasp 9 of which live in the desert. They tend not to be active during the heat of the day and thus the encounter at dusk! The female Tarantula Hawk seeks to capture, sting, and paralyze a Tarantula spider to take to her nest, as immobilized live food for the larva that will emerge from a single egg she lays on the spider's abdomen! Ew! There is the making of a horror story! You may have caught in the narrative that the Tarantula Hawk Wasp delivers the second most painful insect sting, which leads inquiring minds to ask what delivers the number one most painful sting? Read on! 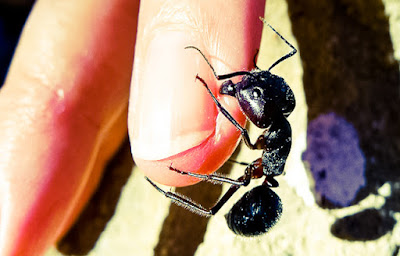 The Bullet Ant, averaging 1" in length, provides the number one most painful insect sting in the world and is described as feeling like being shot with a bullet! The sting of this ant produces wave upon wave of burning pain that will not lessen over a day! The Bullet Ant is a cousin to the Fire Ants that have established themselves in the southern United States. For those of you who know the burning sting of a Fire Ant you are feeling a pain of 1.2 on the 4 point Schmidt Pain Index.  The Tarantula Hawk Wasp has a rating of 4 and the Bullet Ant is rated at 4 plus! Thankfully the Bullet Ant hasn't made it's way into the United States, but are residents of Central and South America rainforests. Beware, as they can be found in tourist destinations such as Costa Rica!
at 11:57 AM