Throughout the month of September we've been busy with life at home. 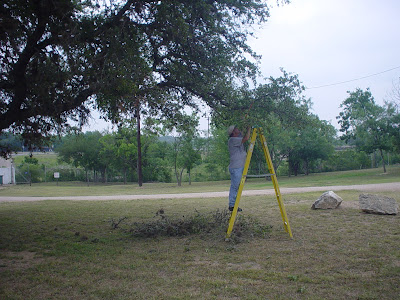 Roy's workkamper duties outdoors have diminished during this Summer's draught, but he has begun doing more technical jobs. He's repaired washers and vehicles, as well as, set-up computers, stage equipment, and cable lines and boxes to televisions. Apart from his workkamper duties, he was hired to repair the interior of a Fifth Wheel Toy Hauler that had sustained some serious water damage. I would have loved to share pictures of the process with you, but didn't want to infringe on the people's privacy. For the last three weeks some intense work was put into tearing out and replacing the back 10 feet of plywood flooring, tearing out and replacing paneling and insulation halfway up the walls, installing cabinets, building steps and custom shelves, and more. As always, Roy did a fantastic job. 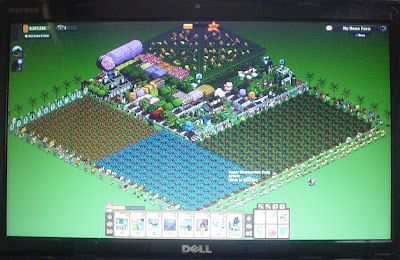 I've been busy with a variety of things, but one is achieving mastery in crops, orchards, and animals in the internet game, Farmville. High speed internet provided for free at our RV Park is a luxury that we don't take for granted. We're enjoying it while it's available knowing that internet gaming won't likely be available to us when we move on. The screen above is my home farm. 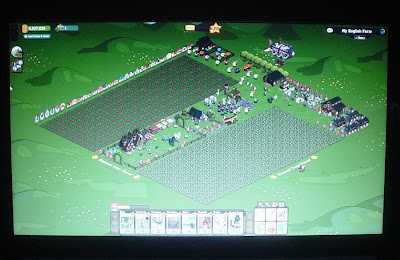 The Farmville sponsors have now created three farms to play with different crops, so now I'm overseeing three! Mine are pretty goal oriented, but each individual can create it to be whatever they enjoy. Some are elaborate villages, and fantasy lands. It always reminds me of playing with plastic toys as a kid, and getting lost in one's imagination. This is my English farm, but you can't really tell it from the way I have it set up. It's kind of my catchall place for achieving random masteries. 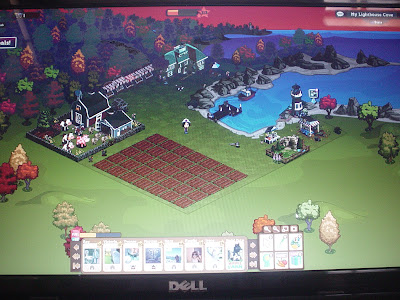 This is the latest introduction. It's called Lighthouse Cove. I'm going to keep it small and simple. It sure makes me think of spending time in Maine and enjoying seafood. I'm not sure if Spring will take us East or West. For now, we're looking forward to another Winter here.

Other internet activities involve creating fliers to promote animal adoptions at the animal shelter back in Michigan, and posting their animal pictures to Petfinder.com.

Internet time is spent researching places we'd like to visit. We recently visited Dripping Springs. It's a suburb of Austin and too spread out to capture pictures of. It had an interesting feel, and I look forward to getting back to explore some more. 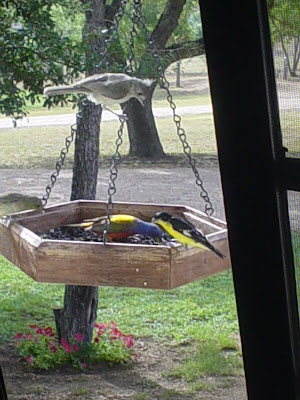 We've been enjoying the variety of birds. The top one is a Titmouse, the yellow guy is a Lesser Goldfinch, and the multi-colored one is a Painted Bunting. 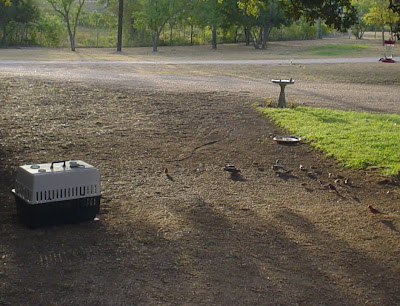 Odie enjoys going to his cat cottage every morning and watching the birds until around 10:00 a.m.. Odie and I will usually get a big walk in before he takes a long afternoon nap. The dogs and I get at least one and sometimes two trips to the play yard on days that are cool enough for them to enjoy a run. 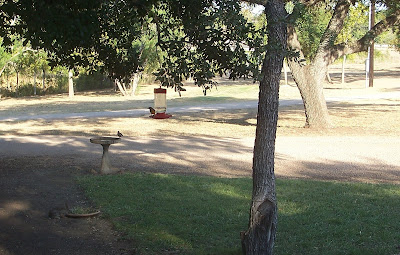 Some days we get other wildlife visiting our oasis. If you enlarge the picture, you'll see a rabbit at the water dish. Poor thing was so thirsty he really pushed his comfort zone by coming in to drink, with us nearby. He drank for a really long time. Made me feel good to be offering water during the draught. The bird on the Hummingbird feeder is a Baltimore Oriole. 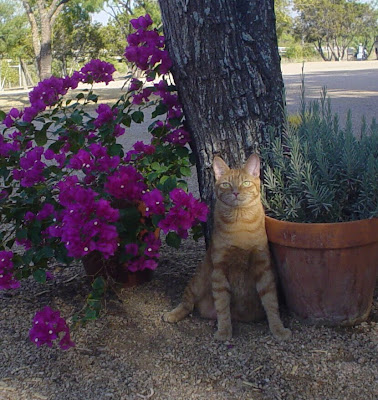 Here's a picture of our big boy, Odie. He's 19 inches from nose to rump, and weighs 15 pounds. He's 17 months old and still bulking up. A video will be coming of his new skills handling rough terrain, and his increased speed.
at 3:54 PM

In the Spring I noticed that a cactus at the RV Park had rubbery growths everywhere a needle would normally be. 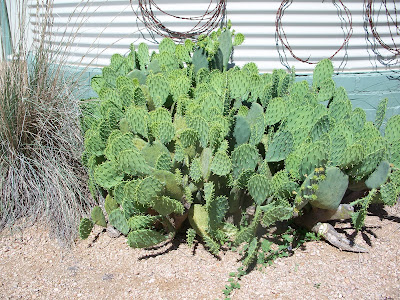 Not being familiar with the life cycle of cacti, I had three theories:

A. They are seed pods.

B. New needles are grown yearly.

C. They are genetically engineered needles. 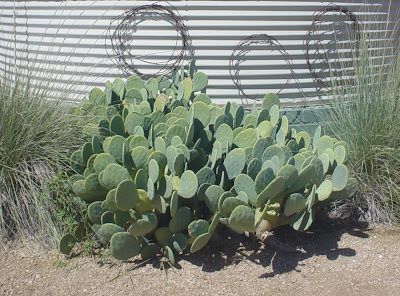 If you picked C, you would be correct. The needles of this commercially grown cactus are engineered to stay soft and rubbery until they fall off! Makes one ponder for a moment the powers of man, doesn't it?