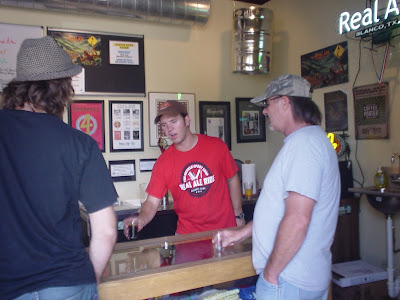 Every Friday Real Ale Brewing Company in Blanco, Texas opens their tasting room for free beer from 2:00-5:00, and gives a free half hour tour of the brewery. 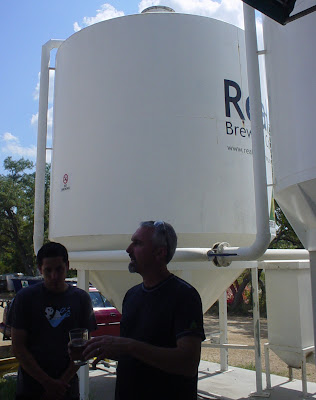 Jim, our tour guide, says he started out with a home brewing kit, advanced to apprenticing in small breweries, and is now one of the two master brewers for the Real Ale Brewing Company.  He says brewing is an art and a science. Listening to Jim speak, it was obvious that for him it is also a passion.  The tanks behind him hold the barley and hops. 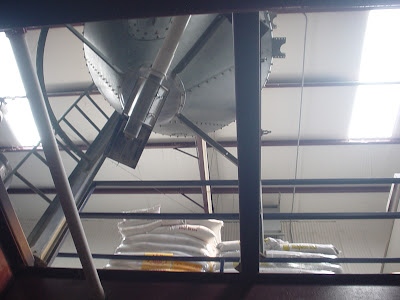 This is a view from the ground level floor to a storage area above. The steel beam and cement flooring overhead is built to hold a semi-truck full of goods. The hopper is what removes the hulls from the grains.  Those grains are then fed into a couple of tanks to make the mash.  Once the liquid part of the mash is completed the residuals are used by a farmer, as feed for his cattle. 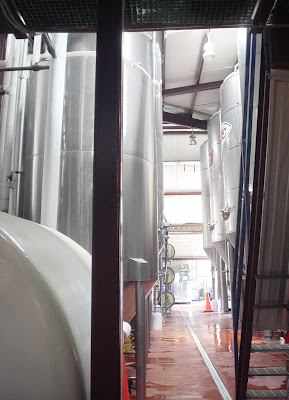 Real Ale Brewing Company began brewing in Blanco 16 years ago. It started in the basement of a downtown business, with two tanks the size of the white horizontal tank in the forefront of the picture.  They have been operating out of their own building for 8 years, and are steadily growing.  They brew several beers, of which, Fireman Four is the most popular.  They brew a dark ale in the Summer that Roy particularly enjoys, named Devil's Backbone after a local scenic highway. 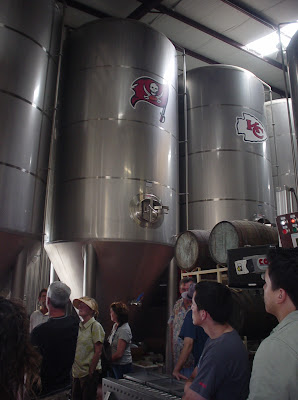 They have several of the large tanks pictured. Each holds over a thousand gallons of beer! They also have several wooden barrels of beer.  The brewery can make a batch of beer in 4 hours.  They currently brew four days a week at 24 hours a day!  The company has 40 employees. 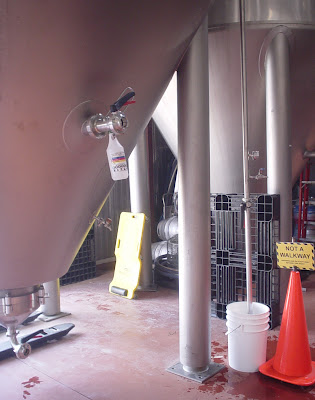 The pipe going into the bucket of water is a vent for the fermentation process. The employees monitor the splashing of the water, as to the activeness of the fermentation going on in the tank. They also have a spy glass into the tank to monitor for clarity. The spray bottle holds a food grade disinfectant for spraying all connectors prior to hoses being hooked-up. Any bacteria other than what is introduced by the brewers can taint the beer. Testing is conducted to be sure they are running at 0 bacteria contamination. 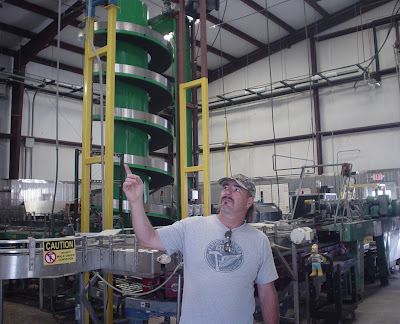 Here is Roy striking a "look at that" pose in the bottling area. Jim stated that everything is automated now, but that when they started out, they had to individually pop-up the 6 pack bottle cartons, hand glue the bottoms, and place the bottles by hand into the cartons. They currently only bottle beer, but at the public's request are getting set-up to package their most popular Fireman Four beer in cans. Apparently bottled beers are not allowed at some events and recreation areas. 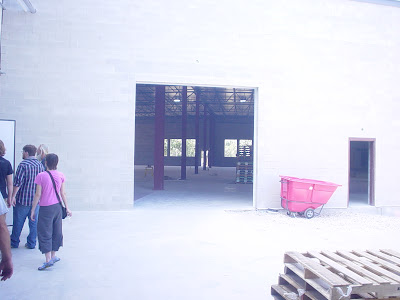 This picture is just for perspective on the layout of the facility. The people are entering a refrigeration area between the facility that we toured and a new building under construction that appears as big or bigger. 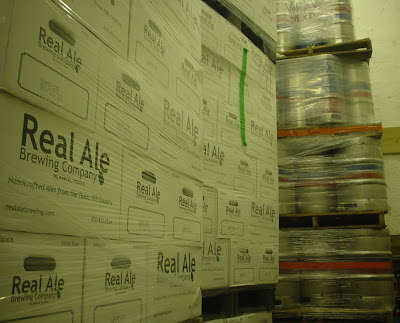 This is the refrigeration area. 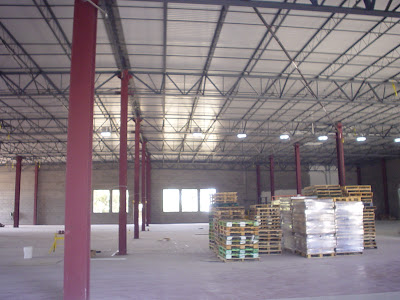 This facility will house a new tasting room, the packaging equipment, and shipping. Jim didn't say what was going into the area where the current packaging equipment is, but I suspect more metal tanks or possibly the racks of wooden barrels. 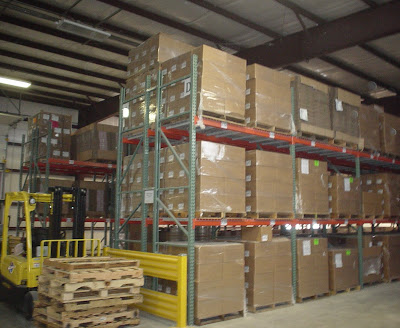 This is another section of the new facility. Prior to the new building, supplies were kept in semi-truck trailers on the property. I always find it interesting hearing how people start out doing something they love on a small scale and it grows into having an impact nationally. 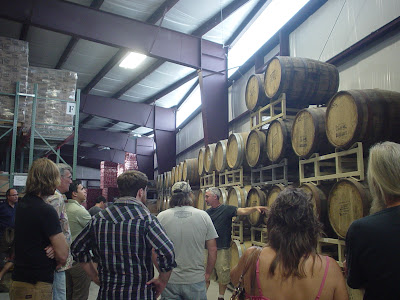 These are the barrels of beer aging in the new storage area. I found it interesting that they test the contents of the barrels by drilling a small hole in the barrel for a stream of the bear to come out of. Once they've gotten their sample, the hole is plugged with a stainless steal nail.  The tour was exceptionally informative, and I highly recommend taking a brewery tour. Who knew there was so much to making beer. Roy and I were ready for a couple cold ones at the end of the tour, and we were obliged free of charge in the tasting room! We timed our tour just right in that the brewery is prepping for its annual anniversary picnic.  It will be held June 30th, and will provide free beer and barbecue for all from noon until 5:00!!! Yee Haw!!!

Roy and I recently visited Jacob's Well Natural Area in Wimberly, Texas. There isn't any admission charge, and a tour guide gives a nice presentation about ground covers and their ability to retain water in the soil. I found it interesting that the pretty green non-native grasses only stop 50% of rainwater run-off, while the dried-up looking native grasses retain approximately 90%.  The tour guide stated that the roots of grasses native to the dry western soil can grow to depths of 6 feet! 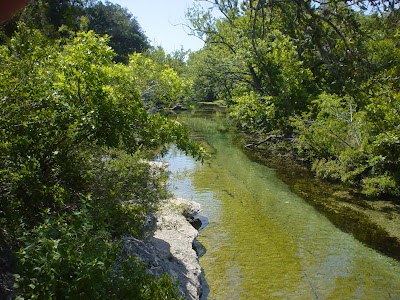 The walk back to Jacob's Well was a quarter mile. Part of the walk was beside Cypress Creek, of which Jacob's Well is the head water. The water was so clear that fish could be seen swimming in it, although, we were at least 40' above the creek. 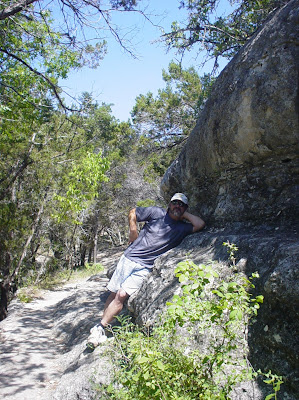 Our guide told us that this rock formation was once the floor of the ocean.  Here's Roy laying in the muck of the ocean floor like a big clam! 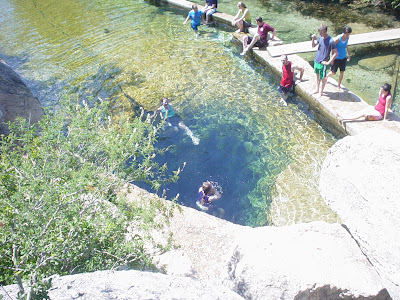 This is the height at which the artesian spring, Jacob's Well, is first seen. One boy made an initial jump from this high ledge.  There are some steps cut into the rocks that go down to a lower ledge. 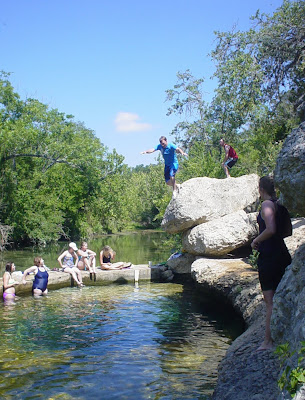 All future jumps made by the boys were from a rock ledge half as high, but still an impressive jump.  The girls preferred the lower ledge on the right side of the picture.  Roy and I didn't venture in for a swim. 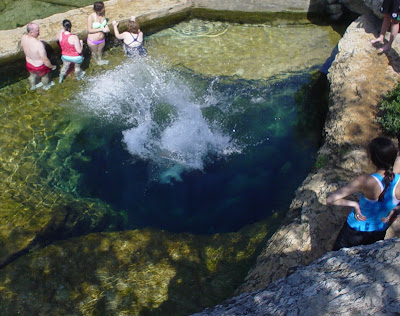 The water coming from the spring was quite calm except for the big splashes made by the kids having fun. The tour guide said that before the spring's aquifer was tapped by thousands of homes, the water was reported to shoot up out of the ground 6' into the air. Resident's from those days report jumping into the water spout! The guide said that she has occasionally witnessed the water to roll from the outpouring of water from the caves below. 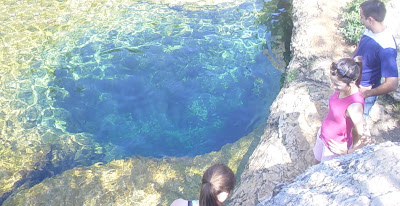 Jacob's Well is known to connect to four caverns below.  You can see what appears to be an opening.  The lure to explore the caves have cost 10 people their lives.  If you'd like to read more about the fatal allure of Jacob's Well, follow this link: www.visitwimberley.com/jacobswell/index.shtml
at 2:27 PM 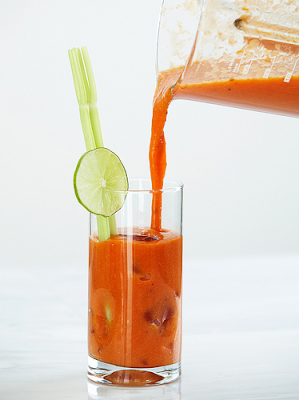 It's always a treat to sit outside with our neighbors, Fran and Ron, enjoying a pitcher of their superb Bloody Marys. Here's their recipe, if you'd like to mix-up a pitcher of your own.

In each glass add ice, a wedge of lime, and a Jalapeno stuffed olive. 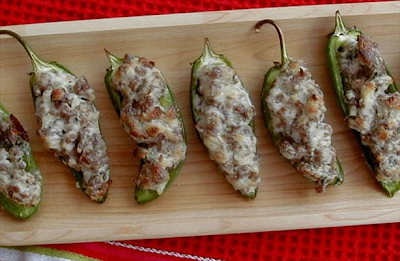 Fran and Ron are always preparing something tasty to share. When stuffed Jalapenos were first offered, it took several reassurances that they weren't hot to get me to try one.  They are now one of my favorite treats! There are a variety of recipes for stuffed Jalapenos on the Internet. Fran uses a mix of cream cheese and garlic which is excellent. Other recipes call for cream cheese with the addition of other cheeses, bacon, or sausage. I prefer the Jalapenos cut in half rather than stuffed whole, as more of a blend of the flavors comes through. The trick to taking the hot out of Jalapenos is the removal of the seeds and membranes they attach to. Some recipes suggest wearing gloves for this part of the preparation, so as not to transfer the hot Jalapeno juice accidentally to one's face. Here is a basic recipe to try. You'll look and feel so brave eating them!

Directions
1. Preheat oven to 425 degrees F (220 degrees C).
2. Place sausage in a skillet over medium heat, and cook until evenly brown. Drain grease.
3. In a bowl, mix the sausage, cream cheese, and Parmesan cheese. Spoon about 1 tablespoon sausage mixture into each Jalapeno half. Arrange stuffed halves in baking dishes.
4. Bake 20 minutes in the preheated oven, until bubbly and lightly browned. Serve with Ranch dressing. 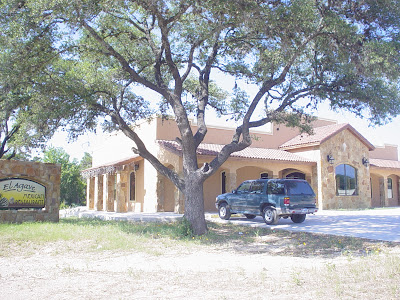 Roy and I recently went to a new Mexican restaurant in town called El Agave.  Tempted by the exotic, I tried fish and shrimp fajitas with Mango tea. Both were excellent!  Roy was glad I shared! 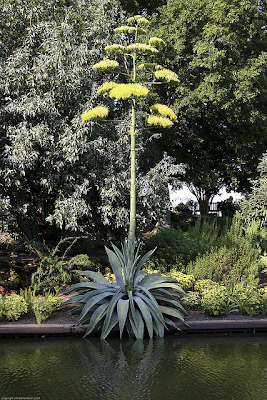 To top off our new restaurant experience I wanted to broaden our understanding of Spanish by doing an online translation of El Agave. I was surprised to learn that El Agave means The Agave! What! That can't be right! Agave is English? By Jove! The English Merriam-Webster dictionary states that an agave (pronounced with long e) is any of a genus of plants having spiny-margined leaves and flowers in tall spreading panicles. There are 700 species. The Blue Agave is used to produce tequilla. 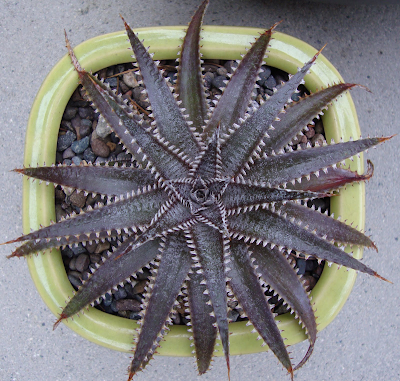 Look around your home. You may have an Agave living with you!