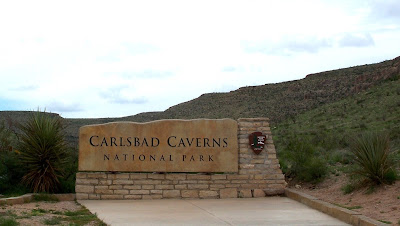 We didn't think we were going to get to see Carlsbad Caverns while in New Mexico, but plans can change quickly in the RV lifestyle!  Instead of heading north as originally planned, we went south!  The desert terrain seems to change quickly, too. 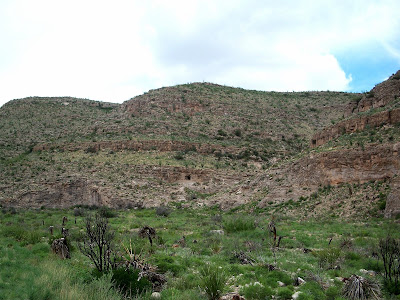 The landscape can be very flat and then as if out of nowhere you'll be climbing mountains!  This is the terrain within Carlsbad Caverns National Park. 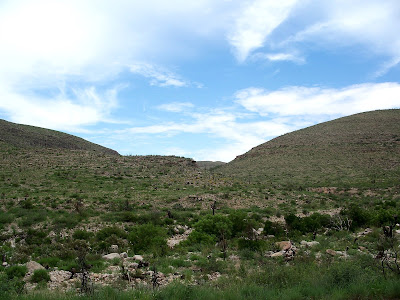 The Guadaloupe Mountains surround a basin which was once an inland sea! 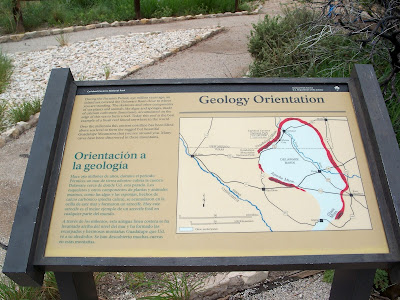 Here is an explanation of the Delaware Basin. 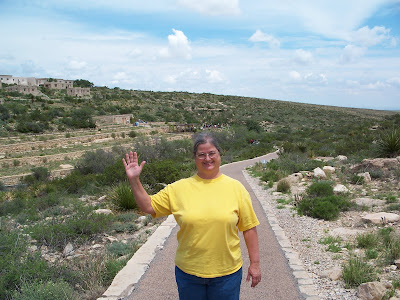 This is the walkway to the natural entrance of the cave.  The cave can also be accessed by an elevator in the visitors center.  The self guided tour of the Big Room is $6.00 per adult.  There are 6 other guided tours for various fees.  Some tours are to other sections of this cave and some to other caves.  They have a walk through lantern tour and some strenuous crawling and climbing tours!  I didn't realize how much of a tan I have until I saw this picture! 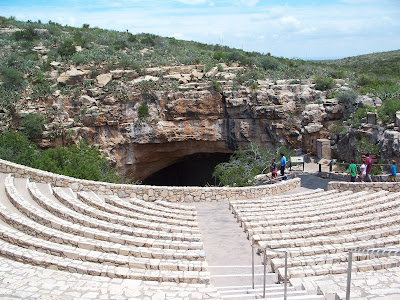 This is the amphitheater for the evening bat flight presentation.  We opted not to attend for a variety of reasons.   The bat population is down during draughts.  We had a full 6 hours of touring, and the 23 mile trip back from Carlsbad RV Park was enough to discourage us from a return visit on the same day.  After seeing White's City RV Park, I would recommend staying there.  It is only 7 miles from the cave.  There are nearby gift shops and a restaurant.  We didn't find the community of Carlsbad to have any tourist appeal, although there is a free art museum there. 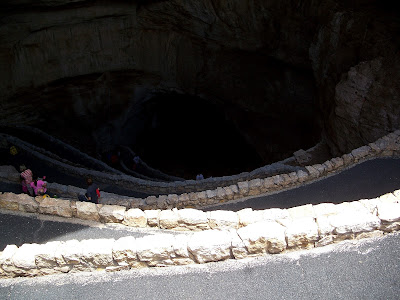 This is the switchback trail into the cave!  It has a descent equivalent to a 69 story building!  Reporting the descent as 69 stories is much more impressive than the reported 750 feet!  The walk down the switchbacks is one mile and is estimated to take an hour.  The surface of the walkway is a nice blacktop and handrails are provided further in.  Roy and I found ourselves using the handrails and plodding along.  We thoroughly felt our age, as we watched group after group of 20 year olds zoom past us without holding on! 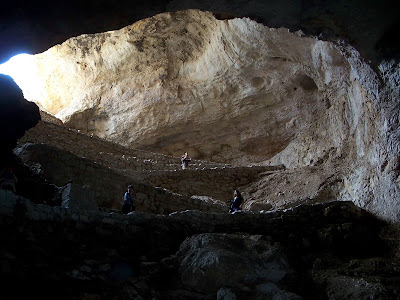 This is the view of the entrance looking upward.  Walking back out of the cave via this opening is allowed, if you think you're up to it! 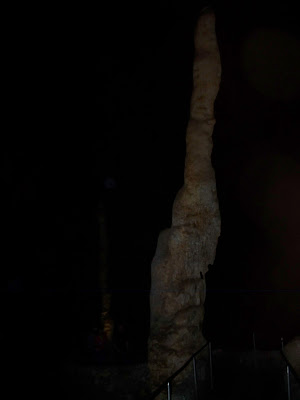 This is the best my digital camera could capture with the use of the flash even with lighted displays!  Looking on the Internet for images within the cavern it becomes obvious that this appears to be an issue for all but the most professional grade cameras.  I find that even the high quality images don't do justice to the cavern, as they can't capture its enormity or the vast number of formations that can be seen together in an area!  The walk around the perimeter of the cavern's Big Room is one mile and is estimated to take an hour.  We were comfortable wearing long pants and short sleeve shirts.  I think shorts might have been even more comfortable than the long pants. 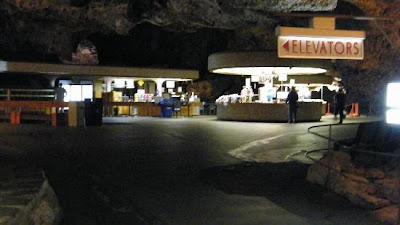 This is the concession area of the Big Room.  There are a few beverages (water $1.50), cookies (2 for $1.00), and a parfait ($4.00).  There were some expensive  prepackaged lunch meat sandwiches.  The line to the elevator stretched from the elevator sign to far beyond the circular souvenir stands and then into a roped zigzag waiting zone!  Two of 4 elevators have been out of order for two years!  The wait to enter the elevator was one hour without available seating!  The crowd was grumbling and considering abandoning the elevator for the walk uphill, but when last call for the walk was announced nobody left and the crowd got quiet!  In our opinion the cavern experience could have been greatly improved by some form of transit within the cave. 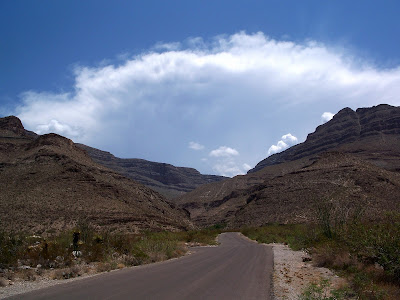 Before  leaving Alamogordo, NM we made an impromptu visit to Oliver Lee Memorial State Park.  It is located about 20 miles south of Alamogordo.  This is the view driving in towards the park.  These are the Sacramento Mountains.  One of the main features of the park is Dog Canyon and the 10-20 mile strenuous hike you can do through these desert mountains.  There is an RV area for camping and a tour of the restored Oliver Lee home. 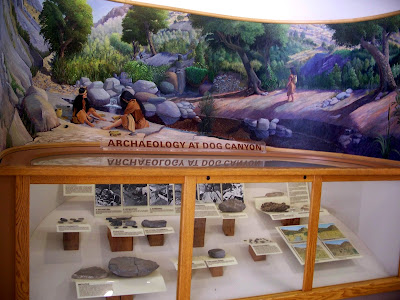 The park has nice displays in the visitors center.  Dog Canyon has been inhabited for centuries for the water that typically runs through it.  This area has been extensively studied by archaeologists. 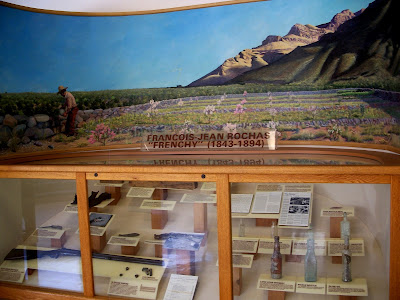 The first homestead in the area was established by Francois Jean Rochas in 1885.  The remains of his 2 room stone cabin are preserved in the park. 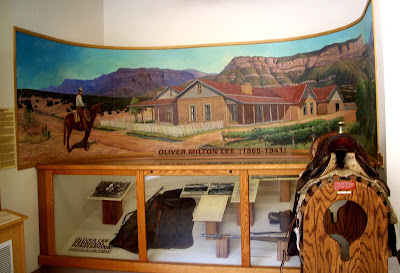 Oliver Milton Lee, an influential rancher and later New Mexico senator, settled in the Tularosa Basin near dog canyon in 1893.  He helped bring the railroad to Alamogordo in 1898.  His restored home is shown as part of a scheduled guided tour.  Be sure to check the scheduled times before you visit the park, if this is something you'd like to see.  You can't get close enough to the house to view it otherwise. 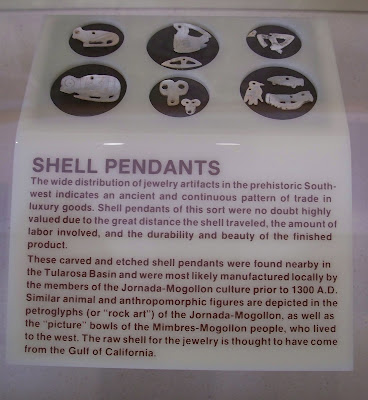 This seashell jewelry is thought to have been made by the Jornada-Mogollon people prior to 1300 A.D., and the shells to have come from the Gulf of California. The jewelry figures are similar to the petroglyphs on the rocks at the Three Rivers Petroglyphs Site. 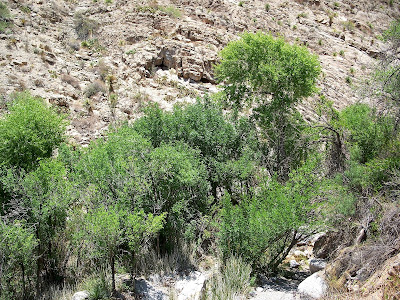 We hiked a trail into the canyon that paralleled this dry river bed.  This area has been in a draught for 3 years.  The lush green plants that grow in the bottom of the local desert canyons always amaze me.  They look so refreshing for the shade they provide and in the midst of the dry desolate desert scream the presence of  life sustaining moisture!  It's easy to see why people would live in the canyons and utilize them for travel. 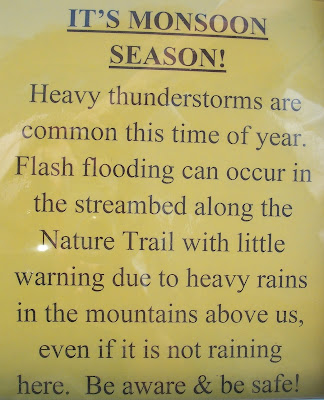 Before we started our hike, we read the posted warning signs.  This sign was interesting in that we had been hearing locally of it being monsoon season!  That is an interesting concept in a desert that only gets 8 inches of rain a year (Yes, a year!) and in the 3 year draught is only getting 4 inches a year!  These flash floods occur as the rain in the mountains comes rushing down the stream beds.  Being a novice to flash floods, I was quickly convinced of their seriousness when I saw two pictures on the Internet taken just 5 minutes apart of a nearly dry riverbed and the next of the same riverbed as a raging flood.  Be aware and be safe! 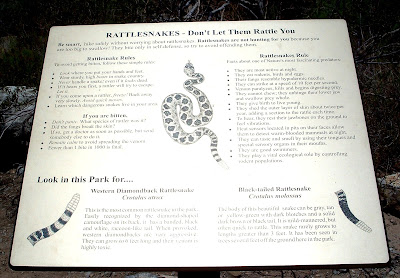 Here is some advice regarding rattlesnakes. 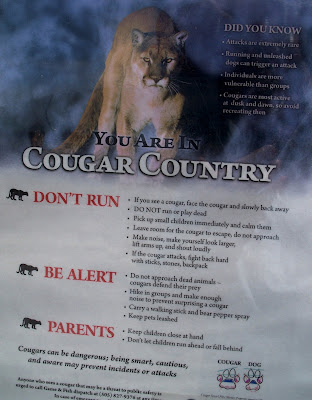