The Shroud of Turin Exhibit & Museum

﻿
When Roy and I discovered this museum in Alamogordo, we were hesitant to go to it, but we are so glad we did!  The presentation and displays were excellent!  We learned a lot! 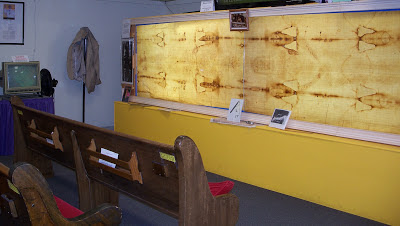 The Shroud of Turin is the cloth Jesus was wrapped in at his burial.  The flax linen cloth is 14' long by 3.5' wide.  There is a frontal and dorsal image.  The back lit shroud on display is a full-size photographic image.  It looks very real.  The original shroud is kept in Italy.  The presenter told us of the shroud's history citing locations, events, and dates.  Here are a few of the things we learned:  1. Whipping and crucifying together was not typically done. Each alone was sufficient to kill a person.  2.  The marks on the body, as shown in the cloth, are consistent with a Roman flagrum.  (A flagrum is pictured in front of the shroud.)  3.  The blood marks on the shroud are truly blood and of a type consistent with the people of the geographical area and time period.  4.  The blood marks show that the blood ran the direction expected for the reported tortures.  5.  The wrists were considered part of the hand at that time and the nail mark went through at that point.  6.  Only 4 fingers show on the image of the hands.  The thumbs are not seen, as nailing through the wrist would cause them to fall limp into the palms.  7.  The triangles on the shroud are repairs from where a hot piece of metal fell on the folded shroud and burned through.  8.  The shroud was in a building fire and has water damage marks.

Over 50 modern day scientists were called together to analyze the shroud.  Many were from New Mexico.  It's said that the scientists felt such skepticism regarding the shroud that they thought they would complete their analysis within minutes, but studied it for 120 hours (5 24 hour days)!  With equipment designed to detect dimension, they learned that the shroud projects a 3 dimensional image!  They don't know why!  The photograph of the shroud projects a 3D image on the monitor, and will also do it with your cell phone!  A reverse black/white negative of the shroud will also project a 3D image!  Other types of photos do not project a 3D image! 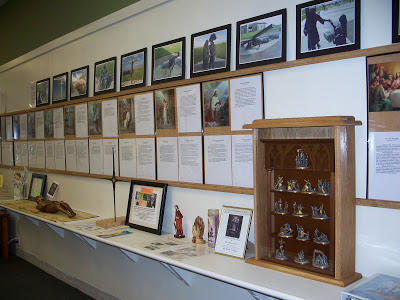 There were lots of nice displays that a person could spend hours reading.  Depicted in the top black framed pictures are the Groom, Texas life size sculptures showing a sequence of events in the crucifixion.  The museum is very interesting and has free admission.  We highly recommend it!