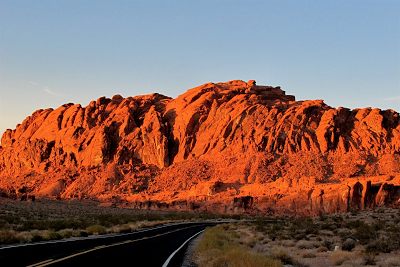 Looking through the Internet images for Valley of Fires State Park, NM we found lots of pictures of beautiful red rock!  The formations had us excited!  We knew that there would also be areas of black lava.  It wasn't until we were closer to our destination that we discovered the error of our research.  First lesson is to be sure that the name of your destination is entered correctly into the image search.  The Valley of Fires in New Mexico is designated as a recreation area rather than a state park.  The second lesson is not to rely too heavily on a Yahoo Image search without noting the fine print describing each picture.  The beautiful red rock pictures are of Valley of Fire State Park in Nevada!  In rechecking an image search we did redeem ourselves somewhat.  If you enter Valley of Fires State Park, NM, Valley of Fires Recreation Area, NM, or just Valley of Fires, NM images of the red rock formations of Nevada will be mixed in with those of the black lava flows, which make up the New Mexico Valley of Fires Recreation Area.  We were a bit disappointed at our discovery, but will be more savvy in future image searches, and also, now have a new destination in Nevada to look forward to! 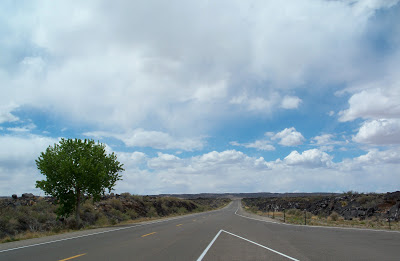 The lava flows of Valley of Fires Recreation area are 5 miles wide and 44 miles long!  I found this scene interesting.  The tree in the picture seems to be the only one around for miles!  It is growing amongst lava in the desert!  It makes me think it found its own little access to some underground water.  The tree appeared that it might be an Aspen. 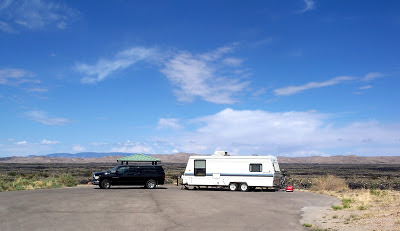 We were very fortunate to get this large camping spot off to ourselves on an overlook! 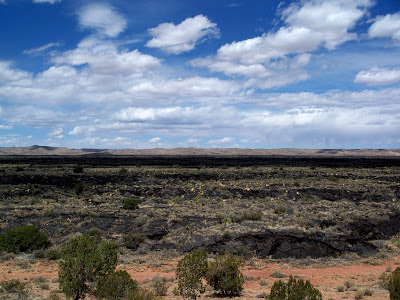 This is the view from our hilltop!  The lava has a surface area of 127 square miles!  In some places the lava is 165 feet thick!!!  It is said to be similar to Hawaiian lava flows.  I kept expecting to see some wildlife go through the red valley. 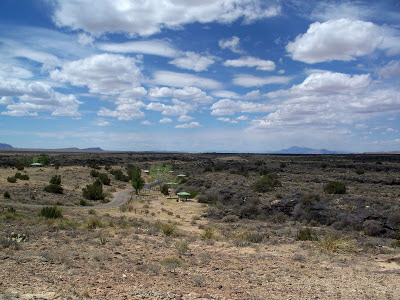 This is the tent camping area from our view.  No wildlife there either!  :-) 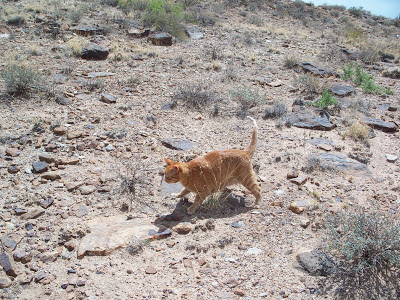 Here is Cactus Odie checking out the desert! 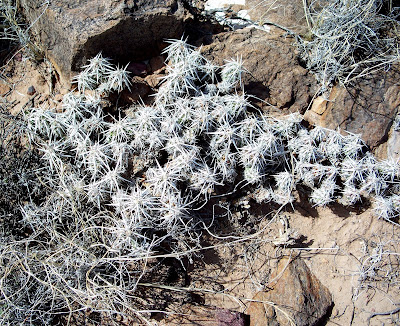 He found a new type of cactus.  It is only about two inches tall.  The needle pattern is interesting.  It makes me think of a starburst!  The needles look hard like thorns.  This is another reason for running dogs and Odie not to roam free in the desert! 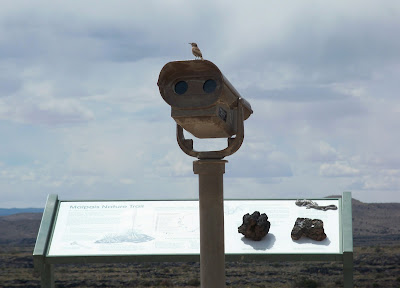 Late in the day, after the temperatures cooled, we went to explore the Malpais Nature Trail.  The lizard on this sign was so real Roy had to touch it just to see if it was! 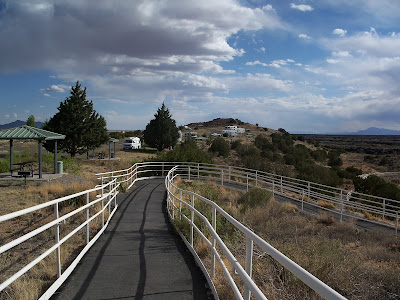 This is a nice shot showing the camping area and the start of the nature trail.  Our campsite was around to the back of the hill.  The nature trail is 3/4 miles long. 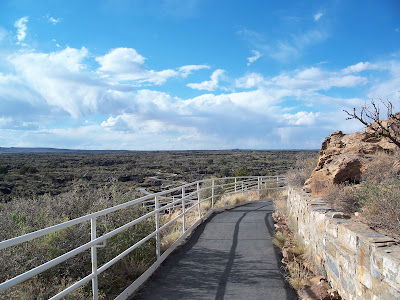 Down we go into the Valley of Fires!  This lava flow is only 1,500-5,000 years old.  That makes this one of the youngest lava flows in the Continental U.S. (Although Mount St. Helens erupted in the 1990s and is building a lava dome in its crater, it did not cause a flow of lava across the landscape.) 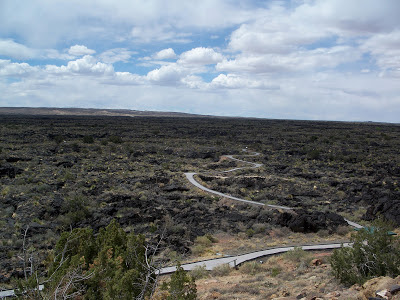 Molten rock flowing across the Earth is a hard concept to grasp.  It is very surreal! 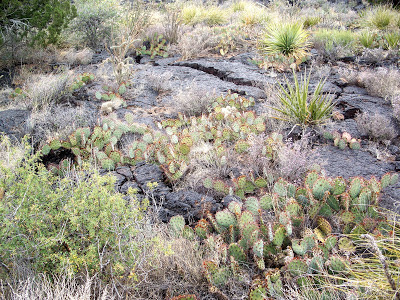 Plants come to life in the dirt that blows into the crevices of the lava.  Their roots chip away at the lava making it slowly into soil, also. 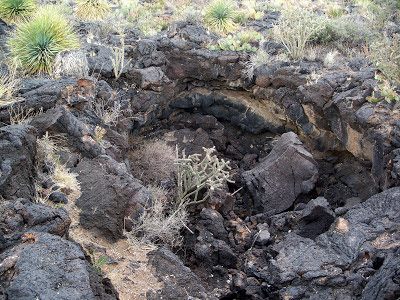 These holes were once bubbles in the lava that cooled and hardened with a top on them. The tops eventually caved in.  Bats take up residence in some of these holes. 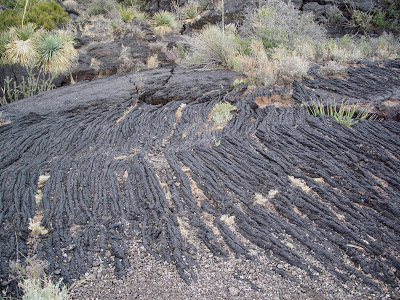 This is called rope lava. 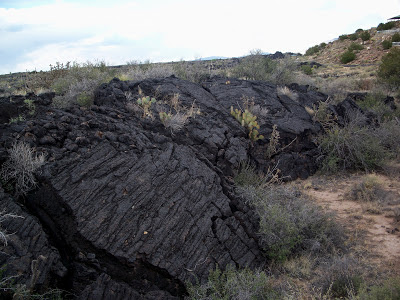 The long fingers of lava that flow out across the land create pressure ridges.  The hot lava cools near its surface and hardens.  Pressure from the hot lava builds inside the tube and creates cracks in the outer shell. 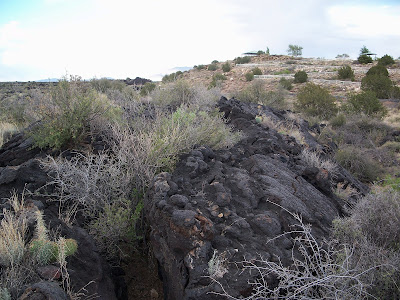 The hike back up is just ahead!  We made the walk in fine shape! 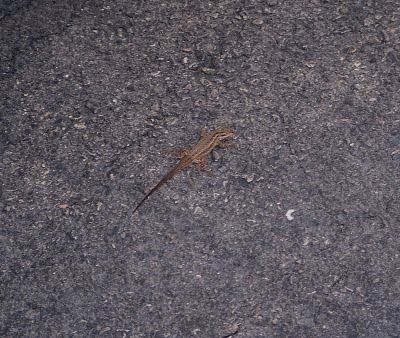 It is said that the wildlife living on the lava has adapted their coloration to darker skin and fur for better camouflage and survival.  The Valley of Fires Recreation Area while preserving many acres offers only camping, the nature walk through the lava, and a few trails through the desert.  We enjoyed our short stay in the park.  We arrived around noon, stayed overnight, and left around 2:00 p.m. the second day.  That gave us plenty of time to explore the park and the nearby community of Carrizozo.
at 11:32 AM